This Chicken Pho Ga recipe is a traditional Vietnamese chicken noodle soup that has the most deeply flavored chicken bone broth, noodles, chicken, and is topped with everything from basil to jalapenos. This chicken pho recipe is one of my favorite Vietnamese dishes, and I hope you love this recipe as much as I do. 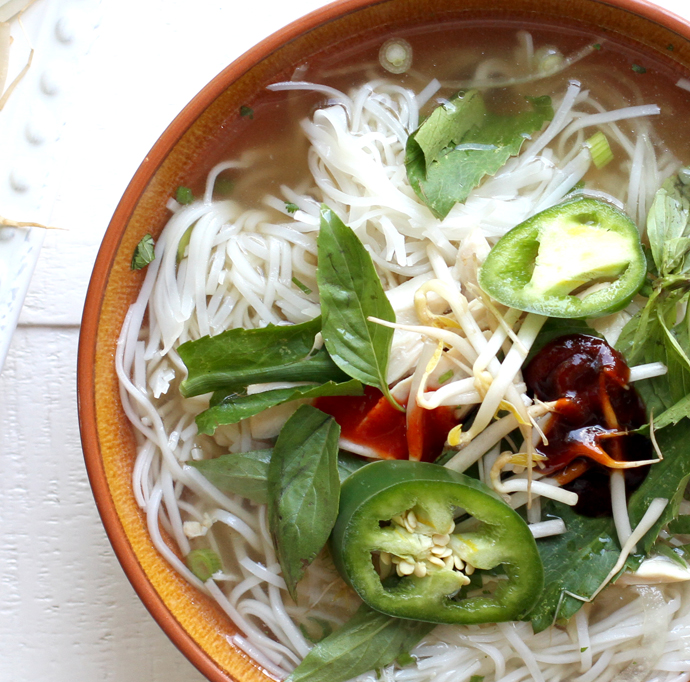 My love of the traditional Vietnamese noodle soup pho, pronounced fuh, is something that’s only developed in the last few years, but boy is it intense, and Art and I have passed on that love to all 3 of our kids.

My friend Mary has grown up learning to cook traditional Vietnamese food firsthand from her mother. When I found out she knew how to cook chicken pho soup from scratch, I asked (begged) her to teach me how. Several weeks back I ventured to her house, and got quite an amazing cooking lesson from someone who is as precise as she is intuitive in the kitchen. She respects recipes, but also has the confidence and knowledge to know when to stray off a bit or even wing it; my favorite kind of home cook. 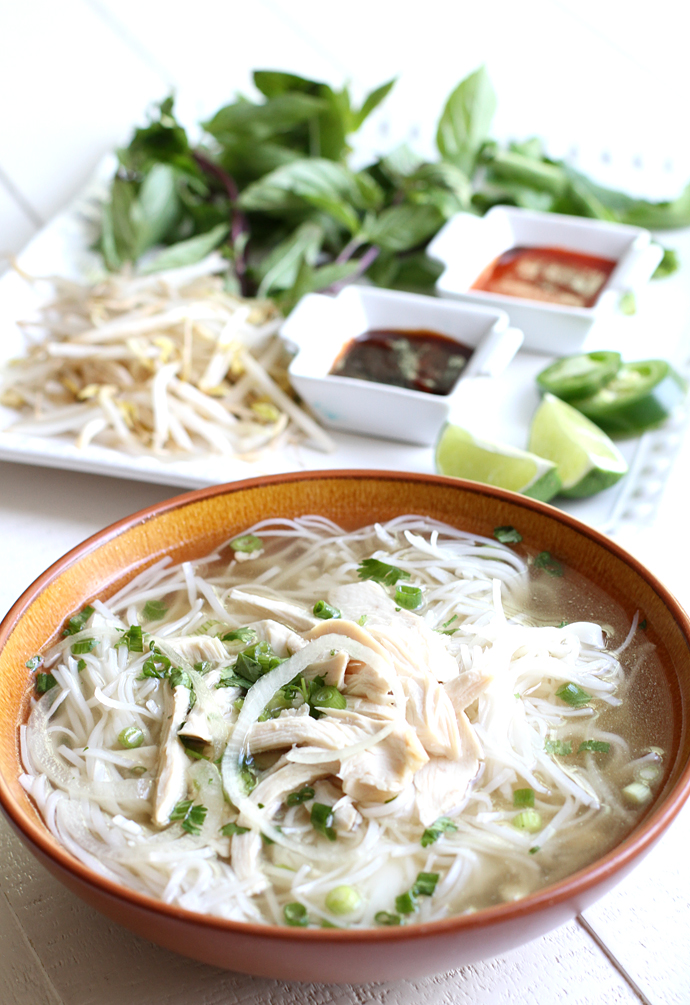 What is Pho Ga?

Ok maybe I’m getting ahead of myself. Let’s start with what this recipe is!

Pho Ga is a Vietnamese Chicken Noodle Soup. “Pho” means rice noodles and “ga” means chicken. So let’s put those two together and you get “chicken rice noodle soup”. And that’s what this is – a warm soup made with flavorful chicken broth and rice noodles.

Pho Ga is definitely a great healthy soup option. This chicken pho ga recipe is a great source of protein, but pho ga is also known for reducing inflammation and improving joint health.

Of course portion size is always key to watch calories and sodium intake with this dish. 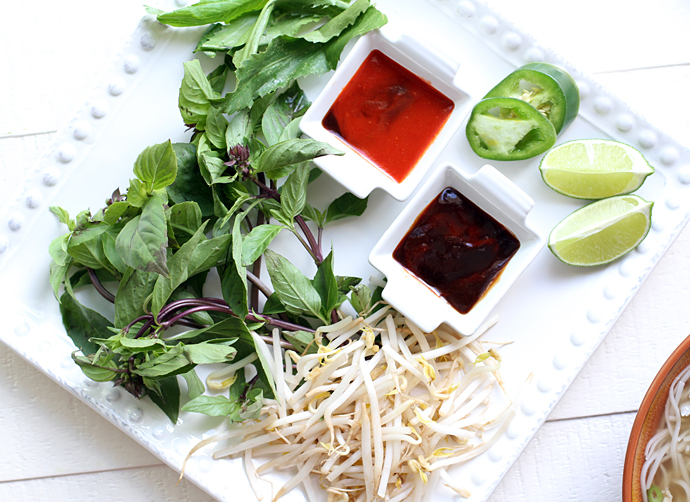 Does This recipe take a long time to cook?

The uniqueness of this dish is in the rich, deeply flavored broth that is cooked for several hours. Beef pho is probably more popular, and is made by simmering marrow rich beef bones for quite a while, at least 3-4 hours, to get a rich beef broth. This easy chicken pho recipe I learned to make from Mary on the other hand, is a little less intimidating to tackle, especially for a first timer like myself.

The broth is made of chicken bones, and the simmering time isn’t nearly as long as with beef pho, so it makes for a good pho beginners recipe. Eventually though I would like to set a day aside to hang out in Mary’s kitchen and learn to make beef pho. For now though, this chicken pho soup does just fine, especially when I can pick up a bowl of beef pho almost any time I’d like. 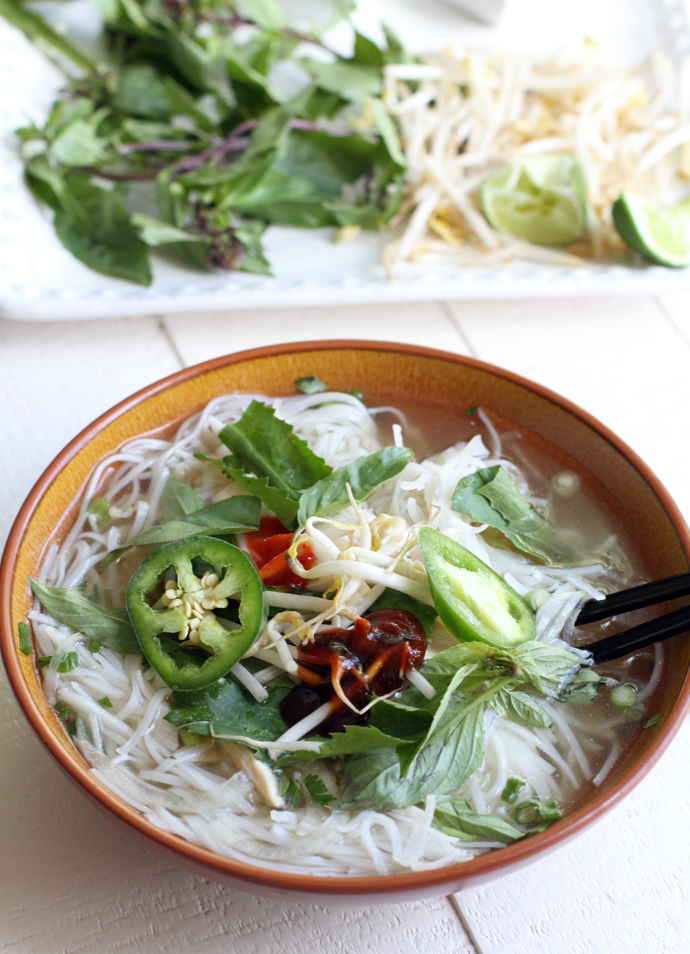 Your pho ingredients can be found at most Asian markets for a very affordable price, or if you don’t have an Asian market in your town, a specialty foods or health foods store should have everything you need.

Here’s what you’ll need to make this recipe: 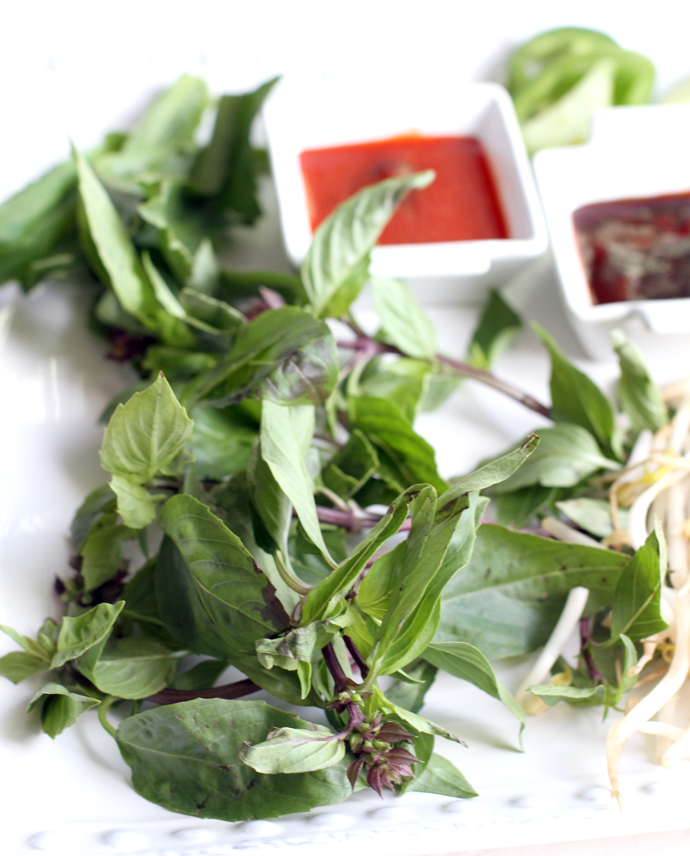 How to Make Pho Soup From Scratch

Although this traditional recipe requires some extra TLC to prepare, the recipe really isn’t difficult to make.

You’ll first need to make the homemade chicken stock. To do so, char the ginger and onion on the stove in a foil-wrapped package. Once charred, you should be able to easily peel both.

While the ginger and onion char, toast the spices in a dry skillet to release their fragrance. You can also add a couple of cinnamon sticks for added depth of flavor. Wrap them up in a cheesecloth afterwards.

You’ll then need to brown the chicken on all sides in a large stock pot or dutch oven (you’ll need to chop the chicken into sections first, you can’t brown the whole thing at once). Then, it’s just a matter of adding all the broth ingredients back to the stockpot and simmering until the chicken is cooked and the broth is rich and flavorful. 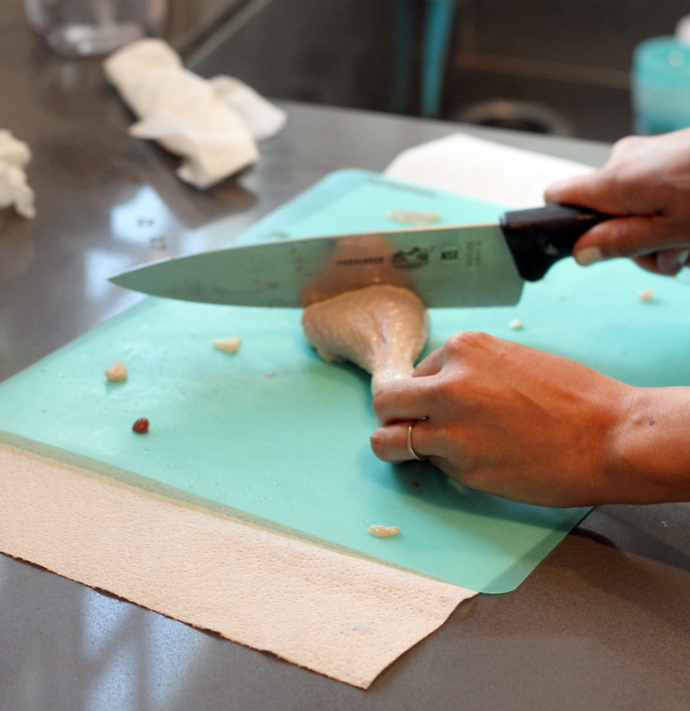 To prepare your pho ga noodles, place the dry noodles in a large bowl and cover with hot water. Soak until the noodles have softened and are pliable, then cook them in a pot of almost boiling water for about a minute.

Drain the noodles, then assemble your bowls of chicken pho ga! 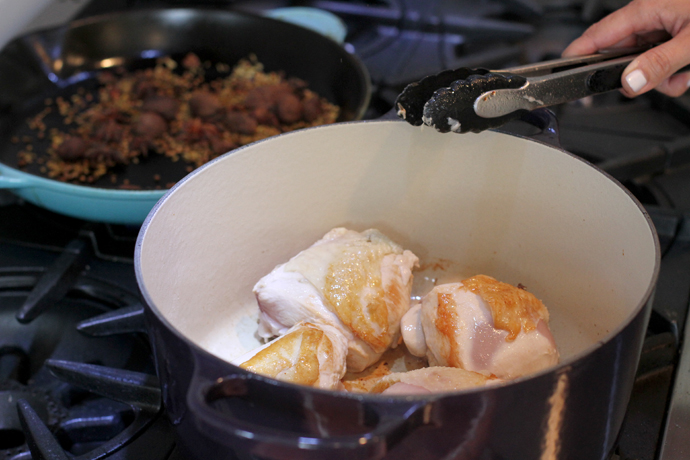 The toppings for pho can vary in terms of how much variety you have, but in keeping in line with traditional toppings, you should definitely aim to have some bean sprouts, basil, and limes, and if you’d like to add a more intense flavor, you’ll need the hoisin and hot sauce too.

If you need more inspiration, here are our favorite pho toppings: 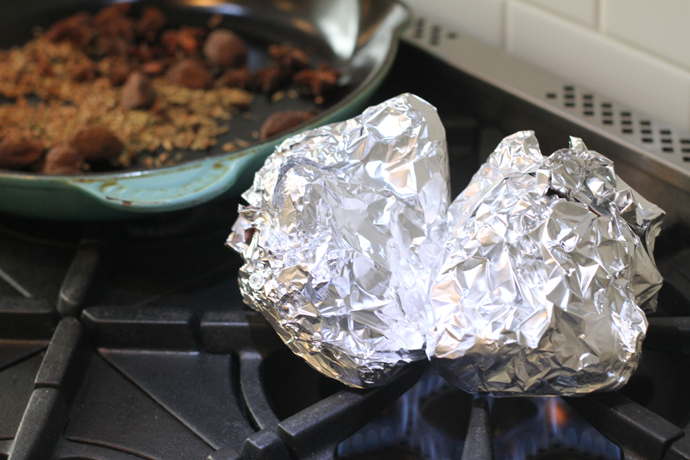 Tips for Making and Serving this Chicken Pho Ga Recipe 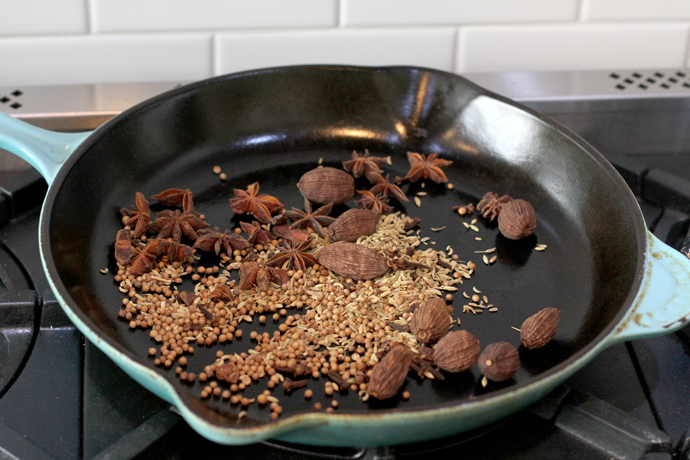 When you’re going to serve your Vietnamese chicken noodle soup, Mary suggests starting with placing your noodles in the bowl first, then chicken, before adding your broth, and finally your toppings. This allows the broth to gently separate the noodles if they’ve become stuck together, rather than inserting the noodles in the broth and hoping for the best.

At restaurants they of course always do it the other way around, bringing you your broth and noodles separate, leaving you to dump noodles into broth, but I assume at a restaurant there are more cooks in the kitchen, and things turn around a lot quicker than when at home trying to feed multiple mouths.

I do find it helpful though to have a big spoon and a pair of chopsticks or fork on hand. To get both noodles and broth in one mouthful, I usually wind my noodles in my spoon, dip the spoon in to get some broth, and then enjoy. So let’s get on with the recipe, shall we? Again, let me know if you have any questions, and thanks again Mary for the amazing lesson and for allowing me to share this with you all! 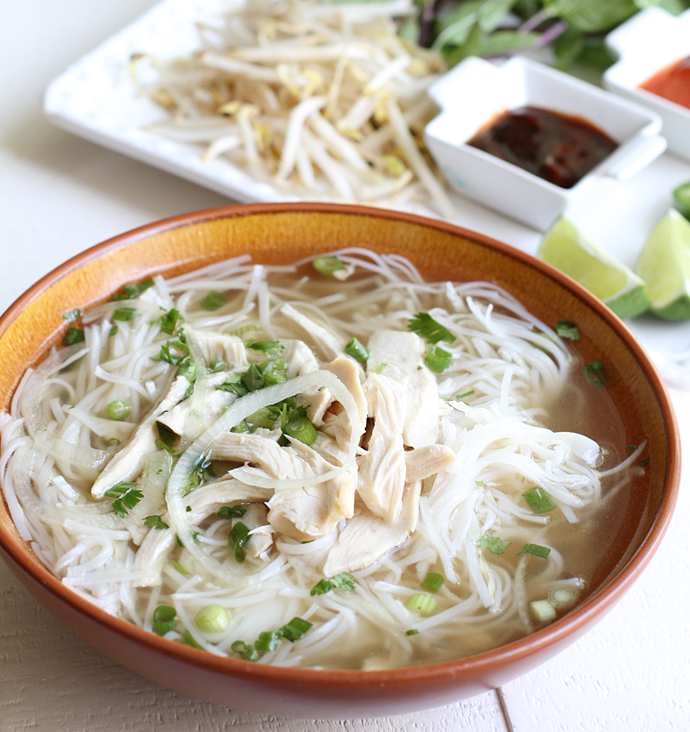 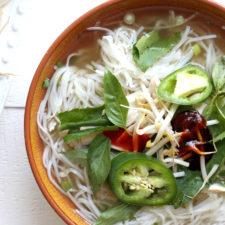 To make the broth:

To assemble your bowl of pho: 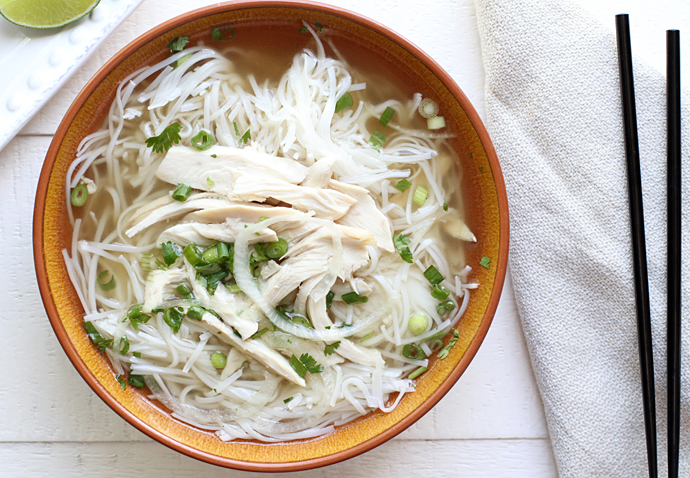