Take advantage of plum season with this easy, foolproof rustic plum tart recipe. The perfect balance of sweet and tart, juicy plums are set atop an easy buttery pastry crust, and topped with a bit of mascarpone cheese or ice cream for the ultimate dessert! 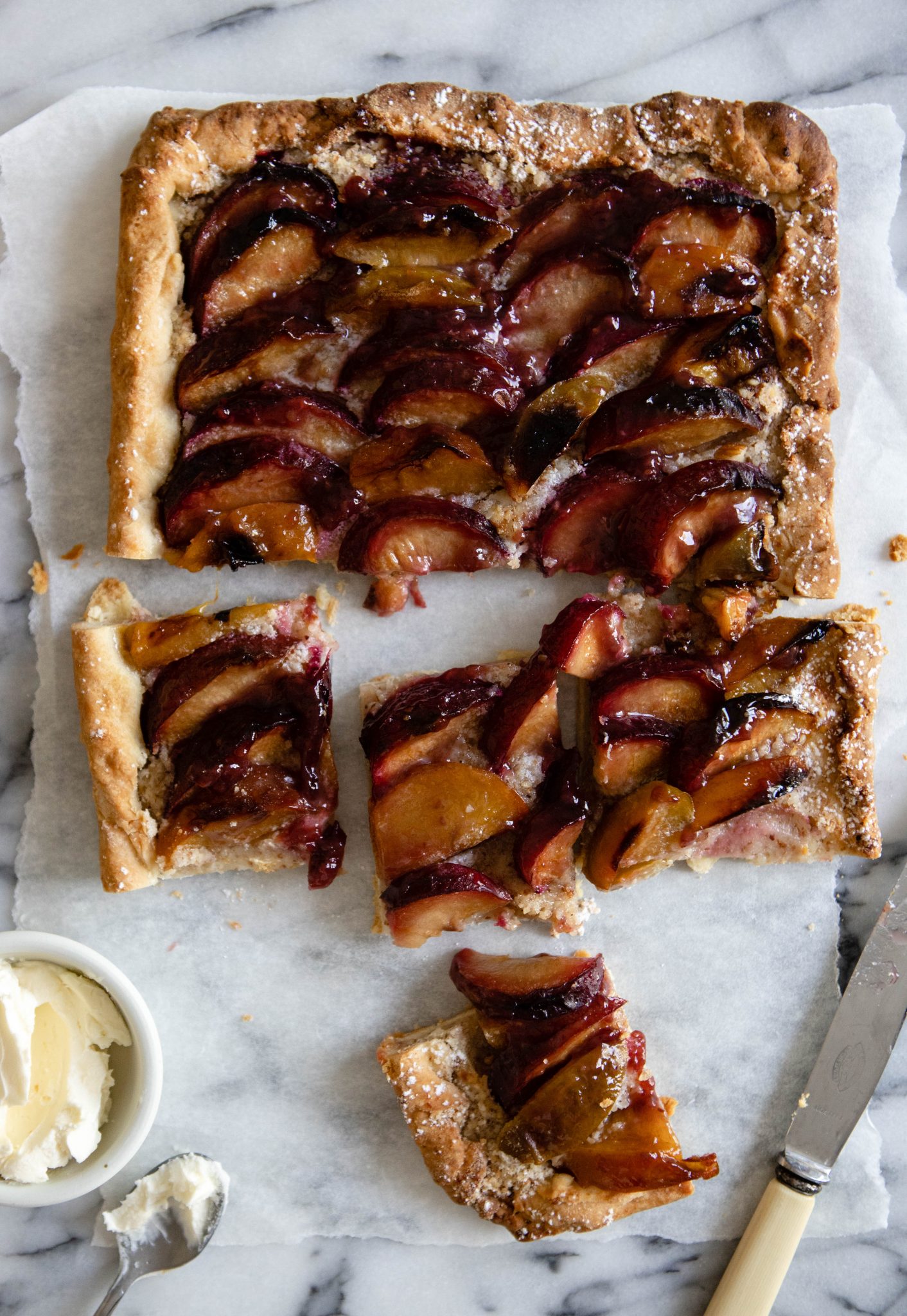 Thanks to greenhouses and worldwide trade, nowadays most produce is available year round. From tomatoes to strawberries, you’ll likely find as plentiful in the dead of Winter as you are in the height of Summer. But plums are one of those fruits that you rarely see outside of late Summer/early Fall, making them that much more special.

Living in California, we have a longer plum season than usual, and you can easily find them from June through October. Right about now is a perfect time to pick up a bunch and snack on them raw or turn them into this amazing simple dessert. 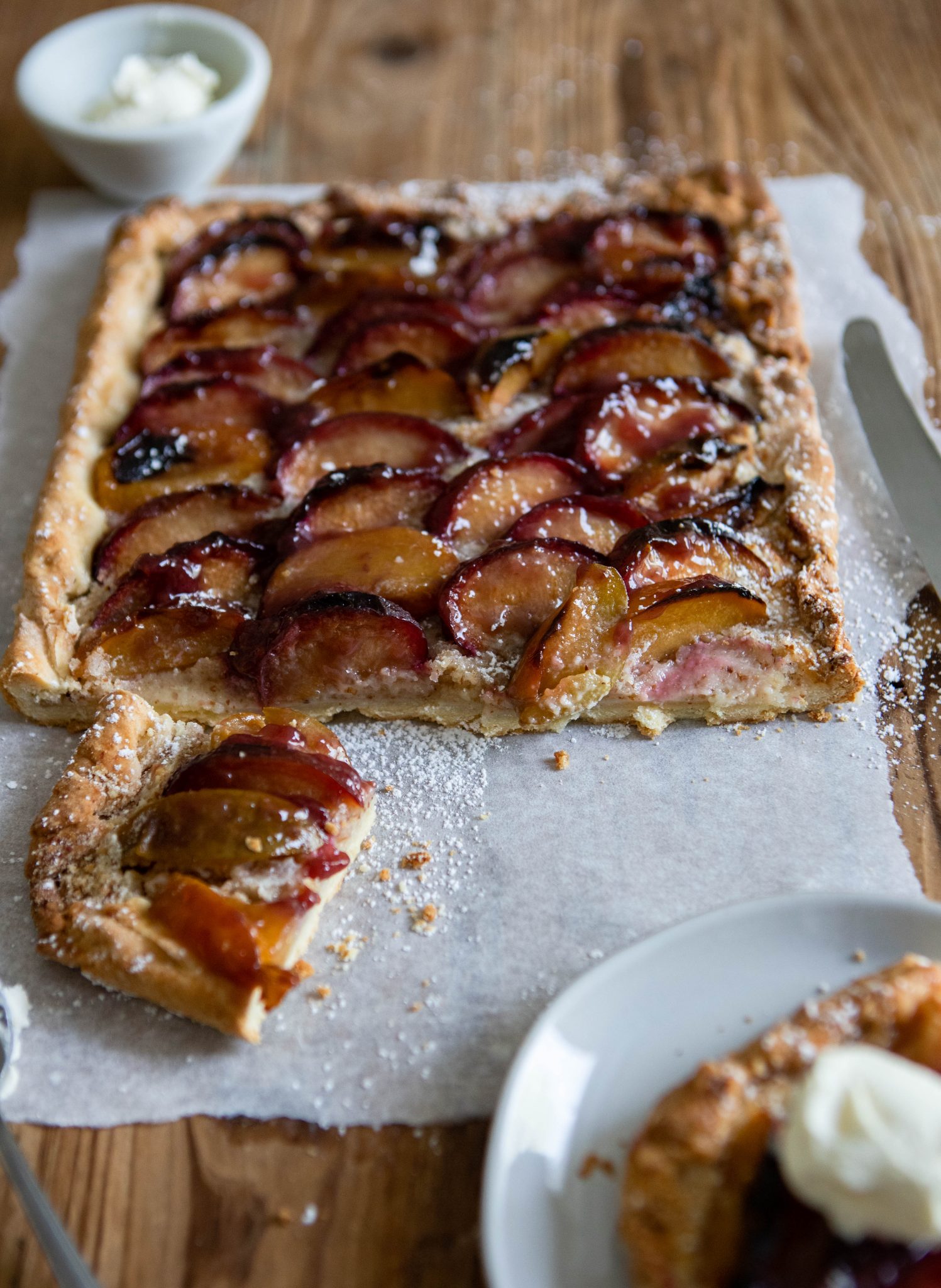 I love a good dessert, but over-the-top sweet desserts are just too much for me. This plum tart recipe is the perfect amount of sweet, balanced with the buttery savoriness of the crust and crushed almonds. It makes the perfect dessert or breakfast time treat with a cup of coffee. 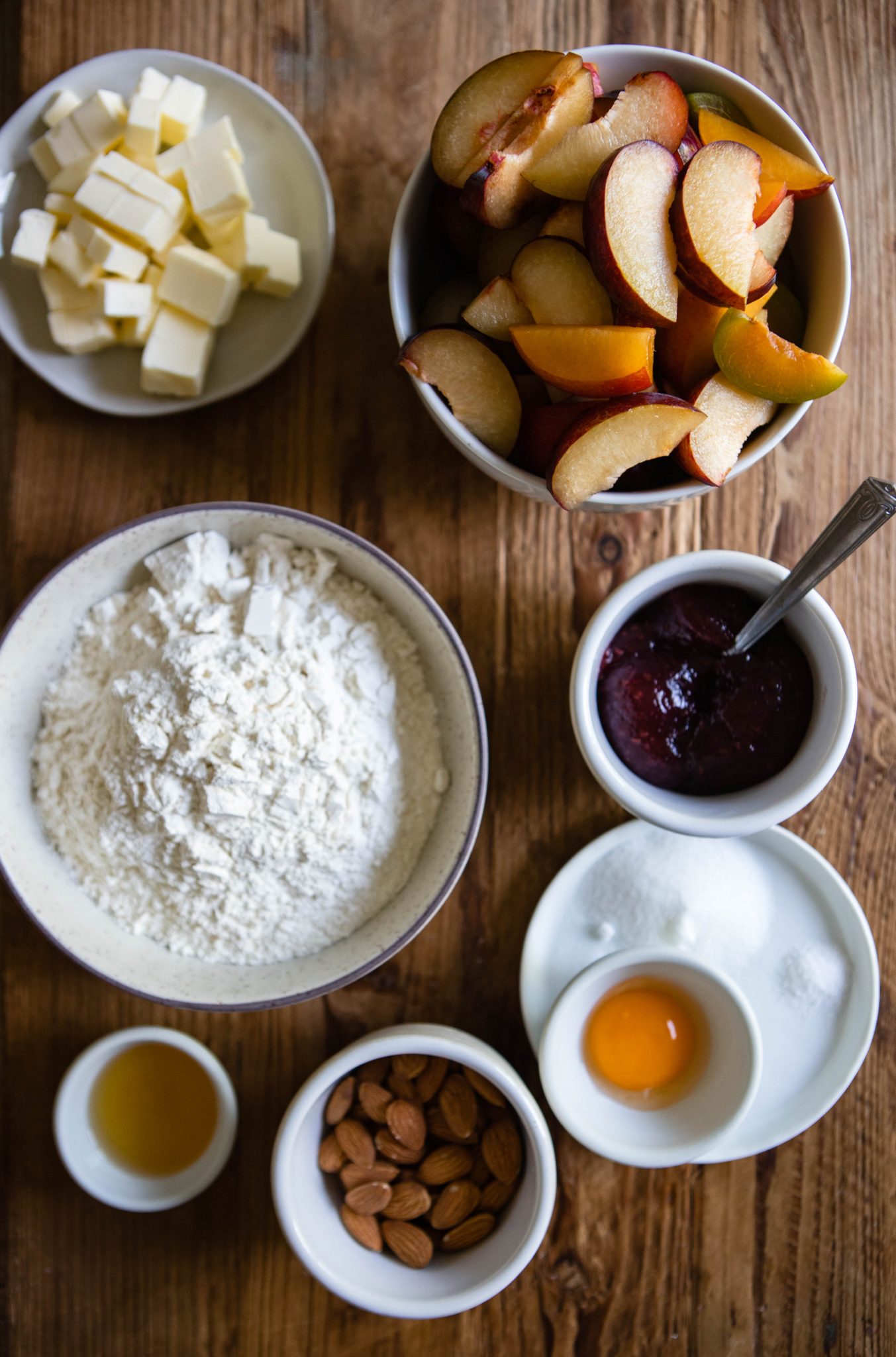 This recipe has a few steps and a little waiting in between but overall it’s a rather simple dessert to make. It is also a great way to use up big batches of stone fruits that may be close to becoming over ripe. I have also tried this recipe with peaches and apricots. Both were excellent!

Begin by making your crust. For this recipe, I used a basic pate brisee crust, or you can certainly use store bought. Chill your crust for at least 30 minutes, and while it is chilling, make the almond filling and slice up your plums.

Once your crust is nice and chilled, roll it out into a very *rustic* crust and place it on a baking sheet. Crimp the edges, sprinkle on the almond filling, and then layer on the sliced plums. Top with small bits of butter and sprinkle on a tbsp or two of sugar, then bake in a 400 degree oven for 30-45 minutes, till crust is golden brown and plums are tender. 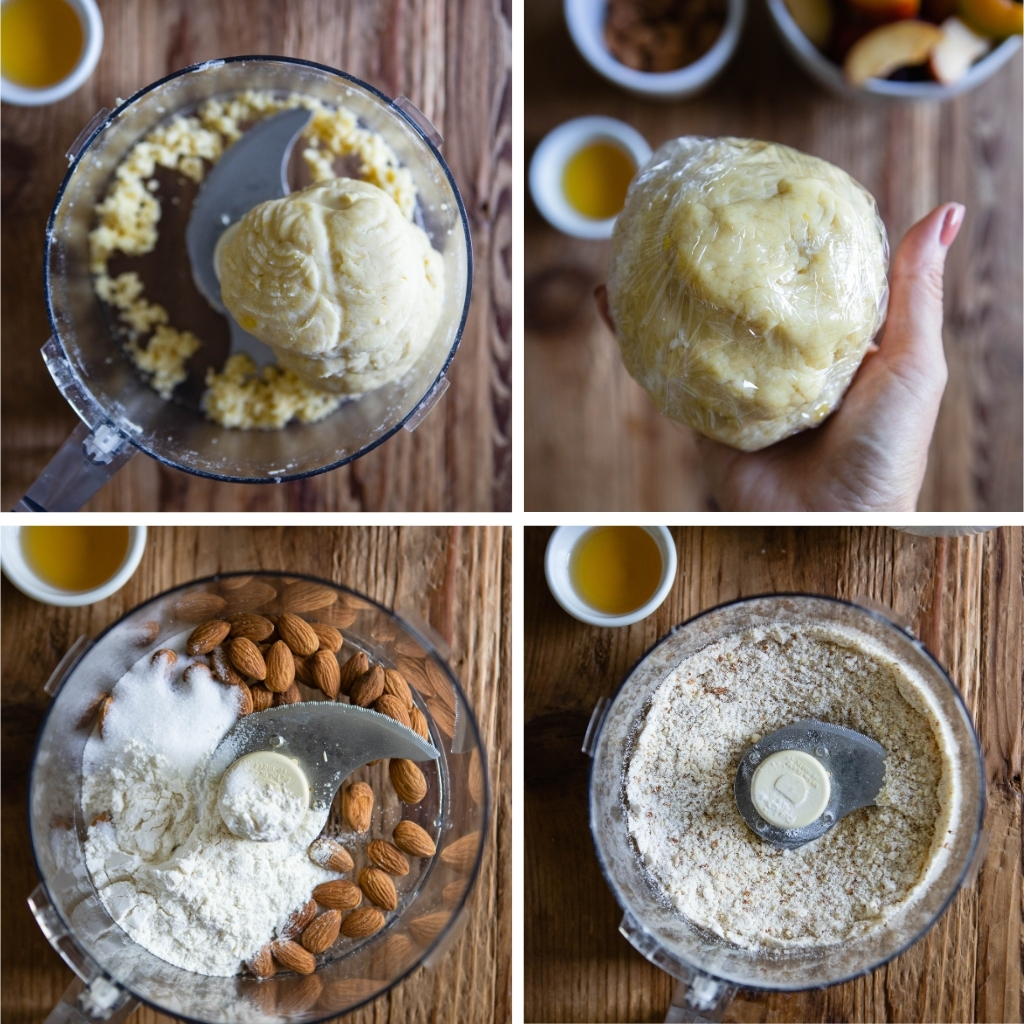 What is a Pate Brisee Crust

Pate brisee is the French version of classic pie or tart pastry, made with flour, butter, water and salt, as well as sugar. This is the same type of crust I use in my Halloween Chocolate Hand Pies and talk a bit more about what makes the French version a bit different than a traditional American pie crust.

American pie crusts typically release more steam and therefore puff up more than a pate brisee, which is typically denser and sturdier than a traditional American pie crust, and is often used for meaty savory tarts and pies.. It Pressing the dough into a disc rather than shaping it into a ball allows it to chill faster. This will also make the dough easier to roll out, and if you freeze it, it will thaw more quickly. 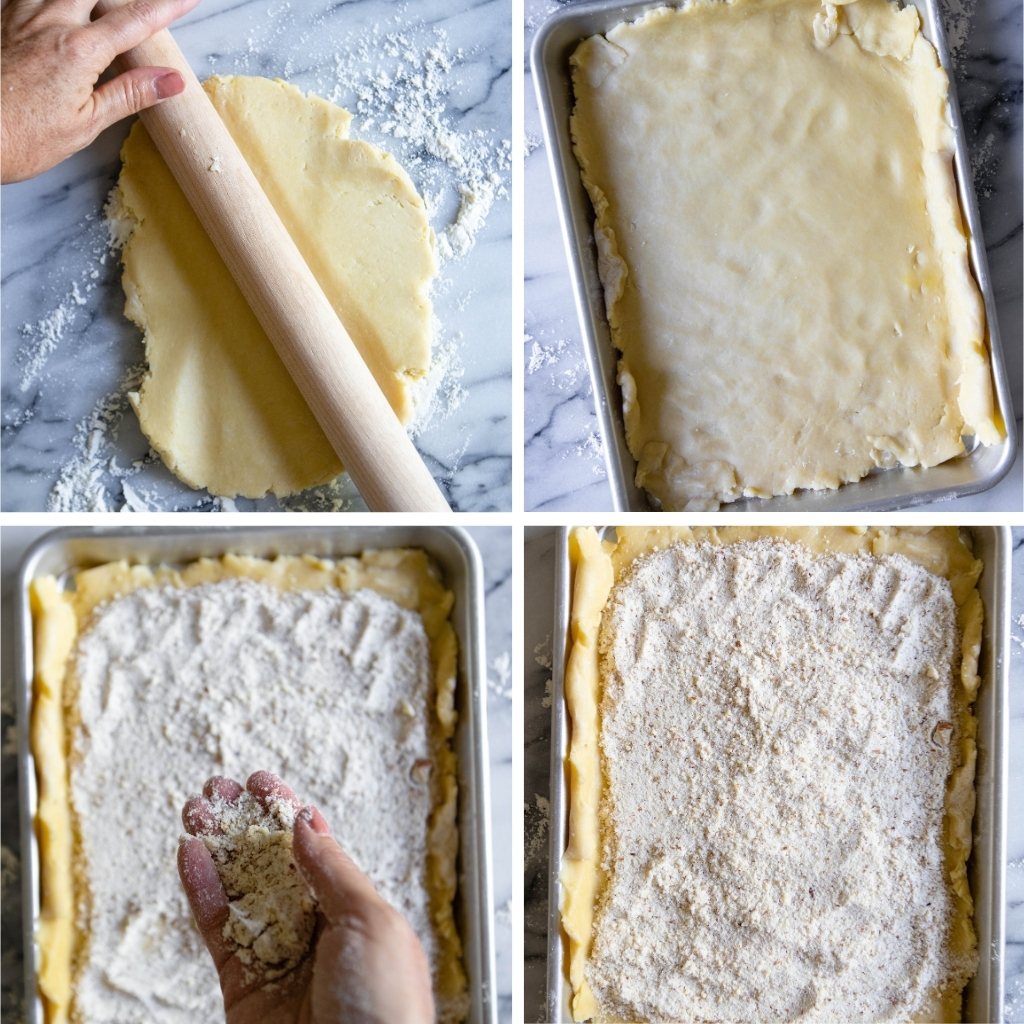 What is in the filling?

The filling is made up of almonds, flour and sugar. Use a food processor to finely chop the almonds and mix the filling ingredients together. This filling of crushed almonds under the fruit gives this tart the perfect amount of crunch and texture, while also working to absorb some of the excess liquid, allowing the crust to remain nice and crisp. 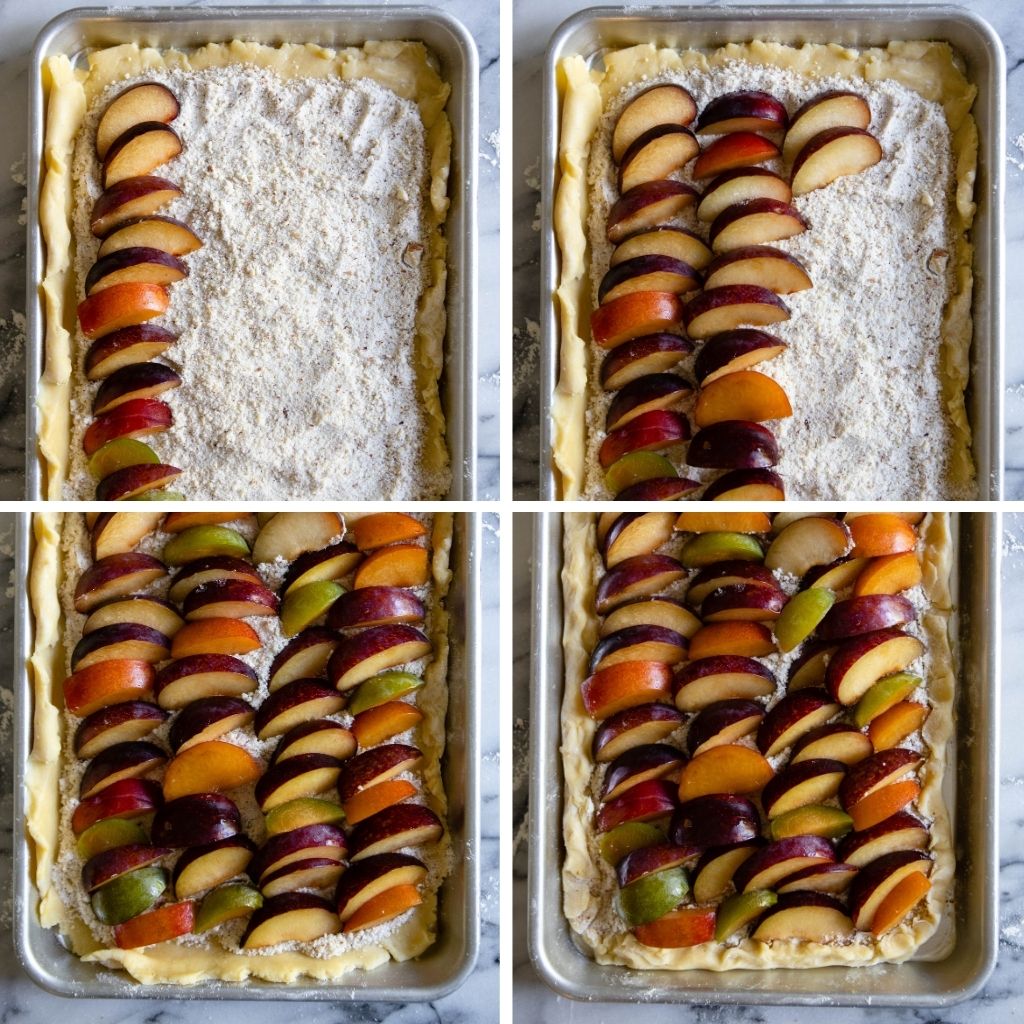 What type of plum should you use?

As you can see in my photos, I used 3 different types of plums I happened to have on hand! Feel free to use whatever variety looks best at the farmers market or is on sale at the store. And as I mentioned above, this tart is versatile in that any type of stone fruit would work! Feel free to try apricot or peach if you wish. 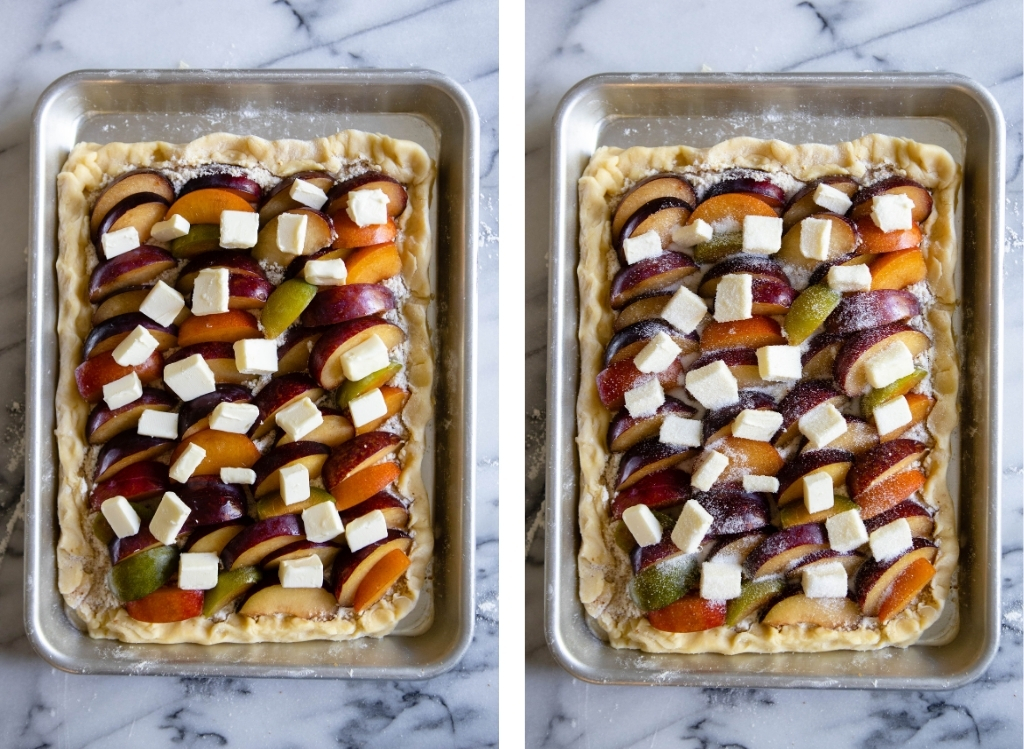 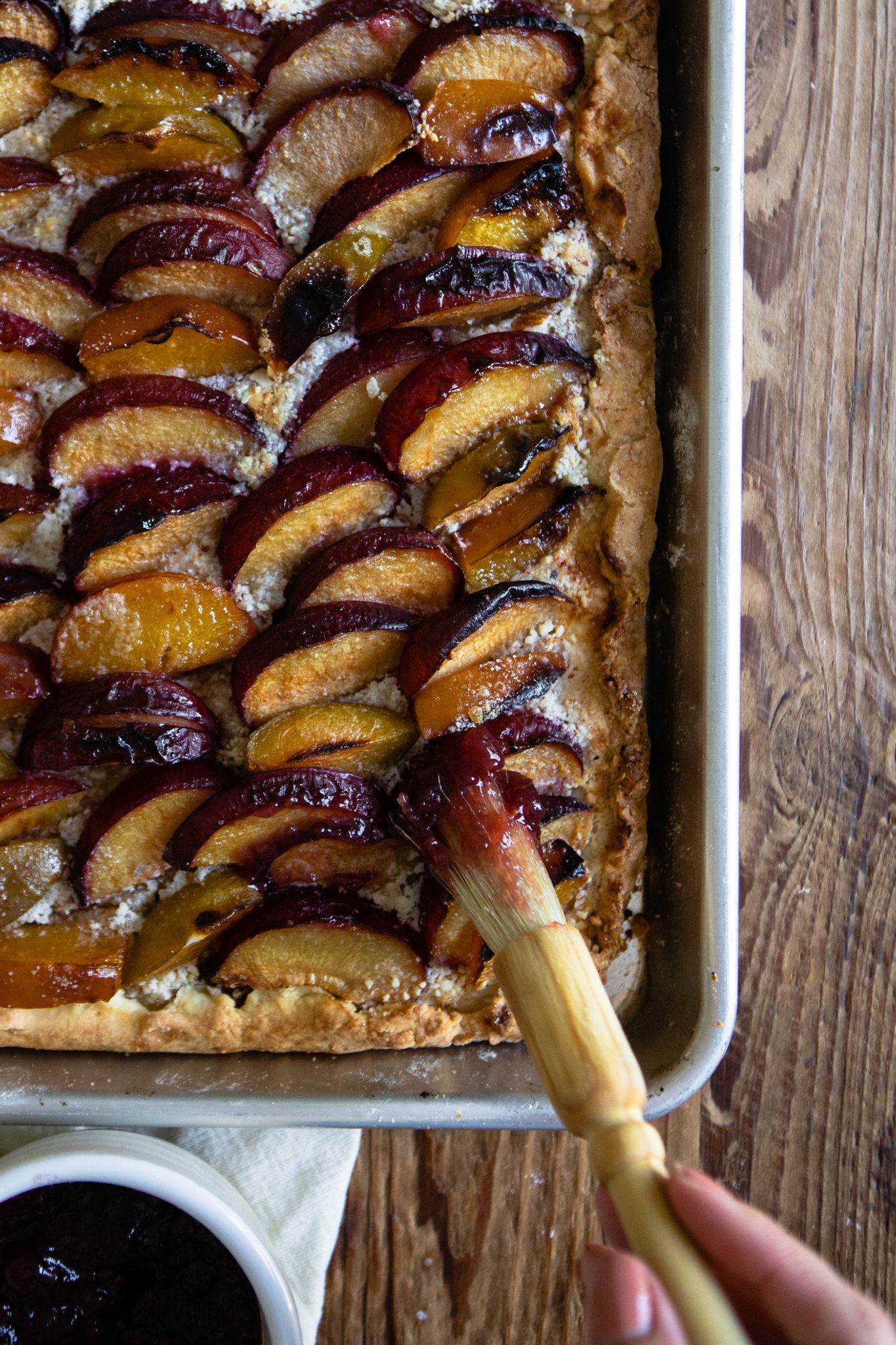 How to Serve This Rustic Plum Tart

After removing the tart from the oven, allow to cool for a few minutes, then cut into large squares and serve warm. I love topping it with a bit of something creamy, such as creme fraiche, mascarpone or even Greek yogurt. It is totally optional but highly recommended. It adds a nice amount of moisture and a bit of tang that makes the plum taste really zing.

You can also reheat leftovers and serve as dessert, alongside a dark roast cup of coffee. 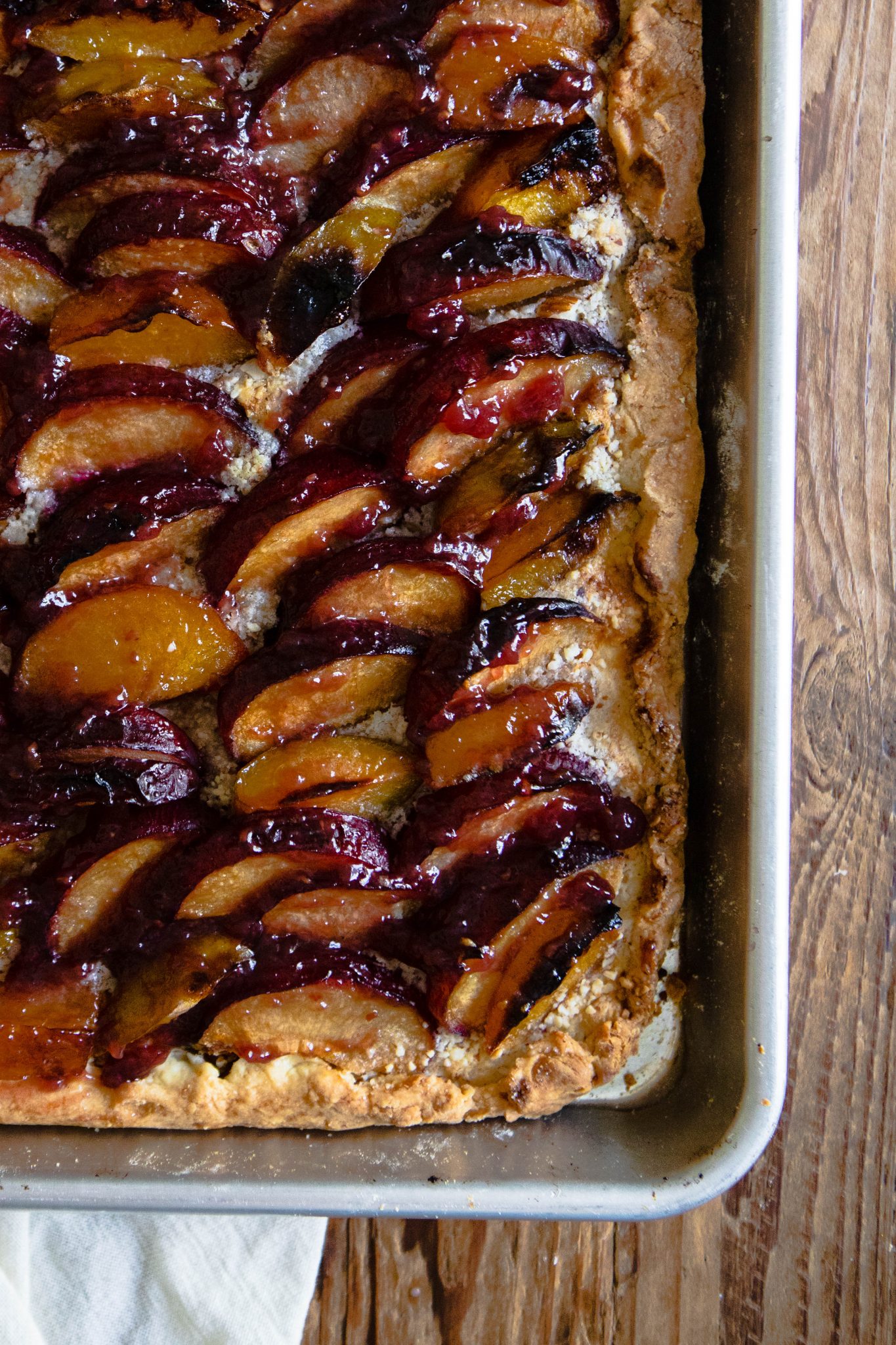 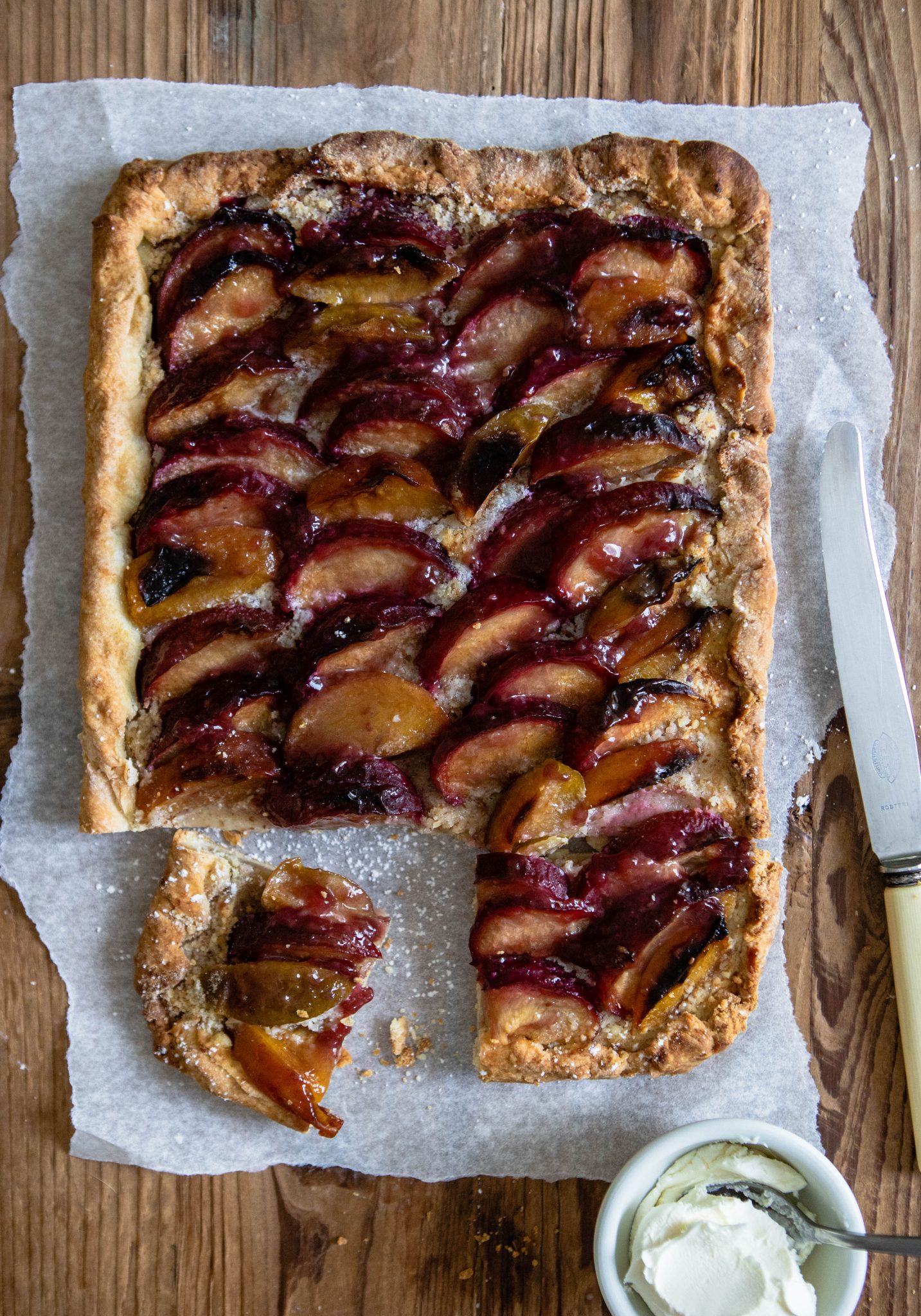 Can You Store Leftovers?

You can store leftovers of this delicious plum tart for up to 1 week in the fridge. Make sure to store in an air tight container, and reheat in the oven or microwave, as opposed to serving cold. 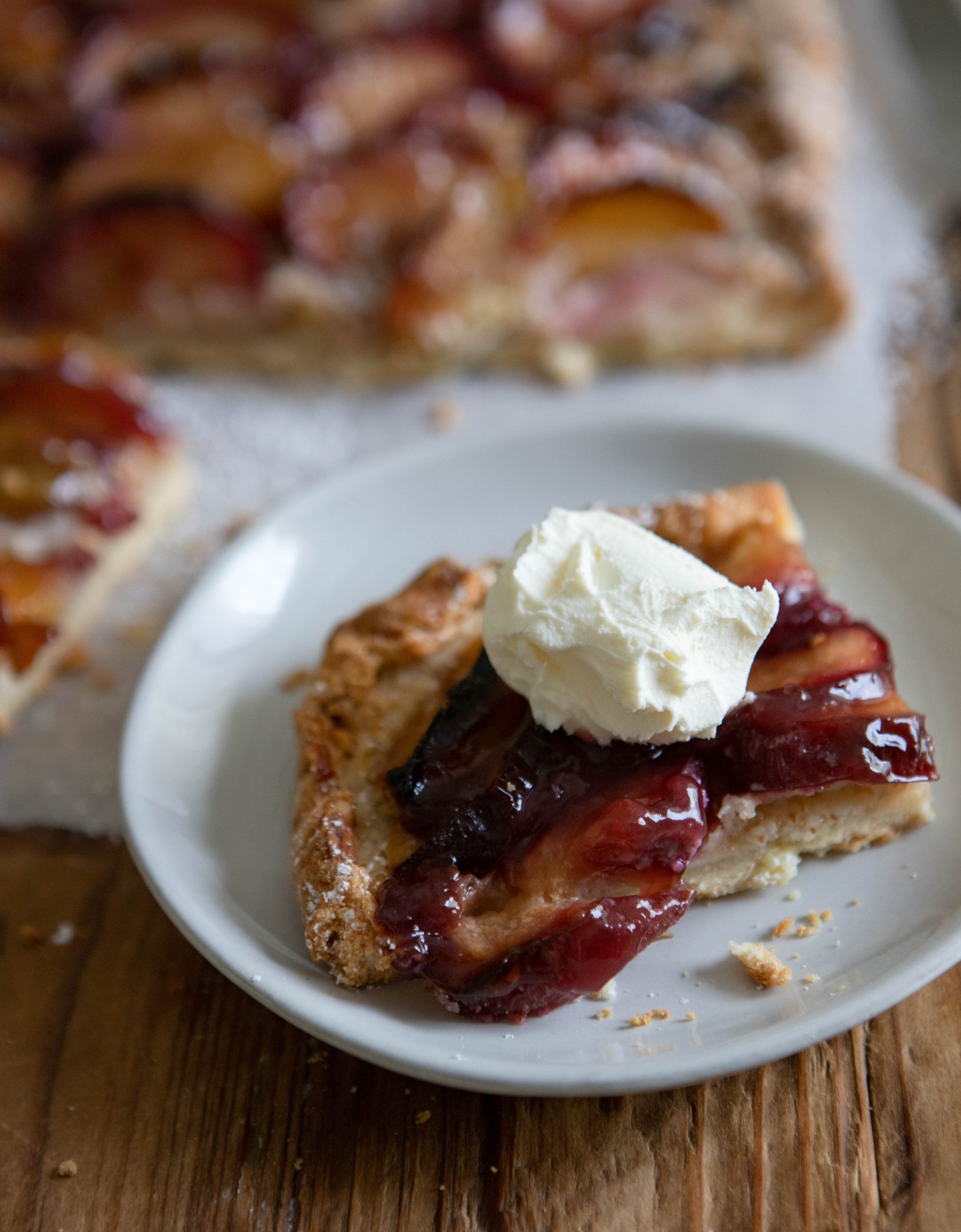 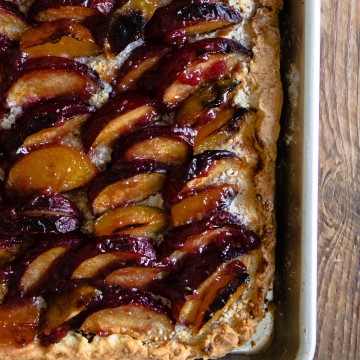 I’ve used a store bought pie crust many times with much success, but if you have a bit of extra time, this crust is easy and pretty fail proof