This cheesy potato casserole recipe is the perfect holiday side dish. It’s hearty and creamy, without being rich or heavy. And by making your own cream of chicken soup and using a potato ricer or food processor, you’ll get the tastiest dish that is both comforting and healthy-ish. 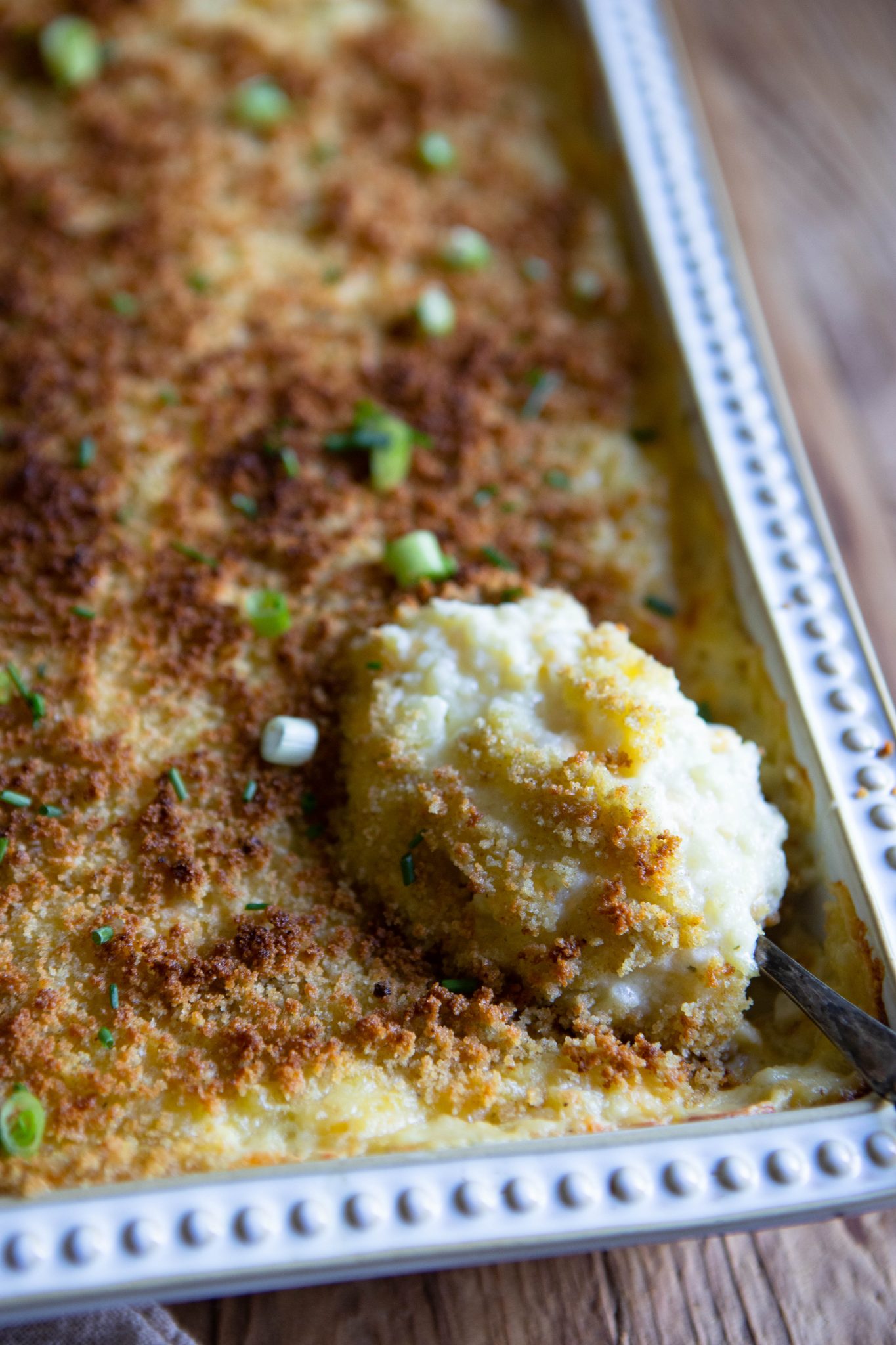 I first tasted this casserole years ago at my in-laws annual holiday party. Of course like any good church party, it was pot-luck style, and the same woman brought the same casserole every year. It was so popular that one year she began bringing 2 of this cheesy potato goodness. My mother-in-law eventually tracked down and gave me the recipe, and I was thrilled to discover how relatively easy it was to throw together. Let’s get cooking, shall we?

If you plan to make your own cream of chicken soup, you’ll also need: 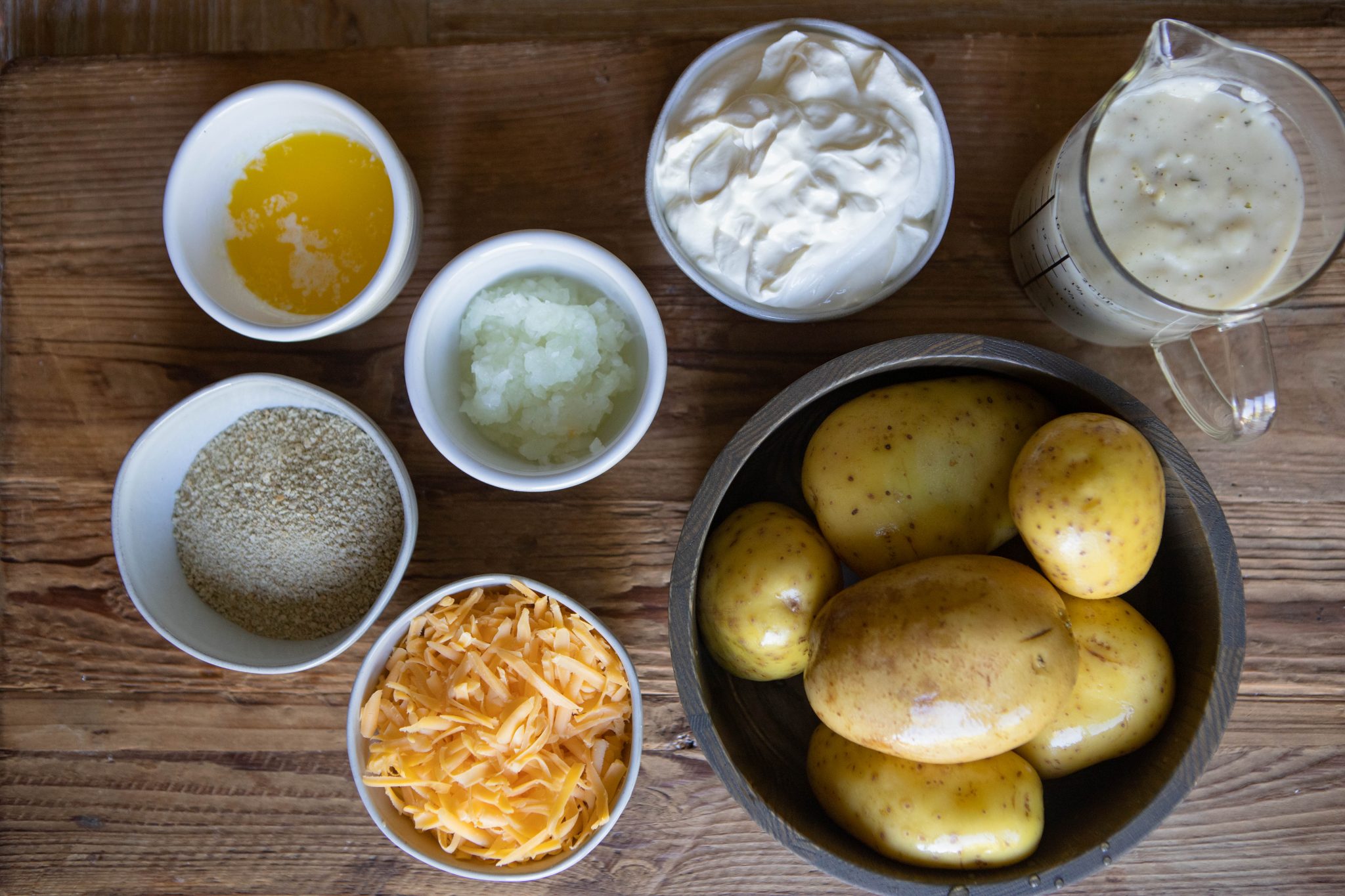 Begin by boiling your potatoes till they are fork tender but not totally cooked through. They should hold up to being riced or grated through the food processor without turning into mush. Once done cooking, strain and let cool.

When cool enough to handle, run each potato through the potato ricer, into a large bowl. 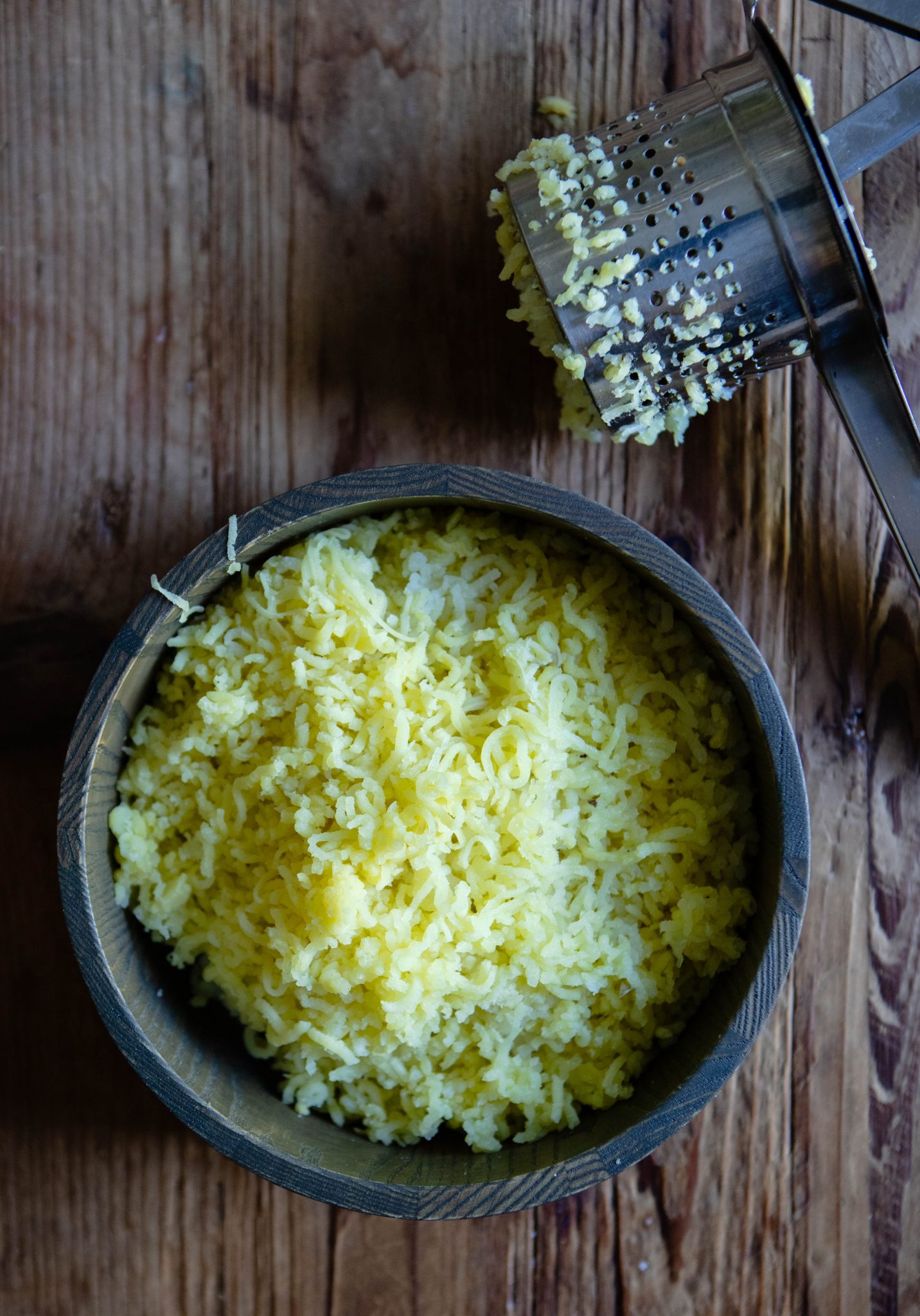 While the potatoes are boiling, combine the grated onions, shredded cheddar cheese, sour cream, half of the melted butter, and cream of chicken soup in a blender. Blend on low till just combined; you don’t want a totally smooth texture. It should be a little chunky.

Add the creamy cheese mixture to the riced potatoes, and mix gently till combined and potatoes are totally covered. Spoon into your favorite casserole dish. 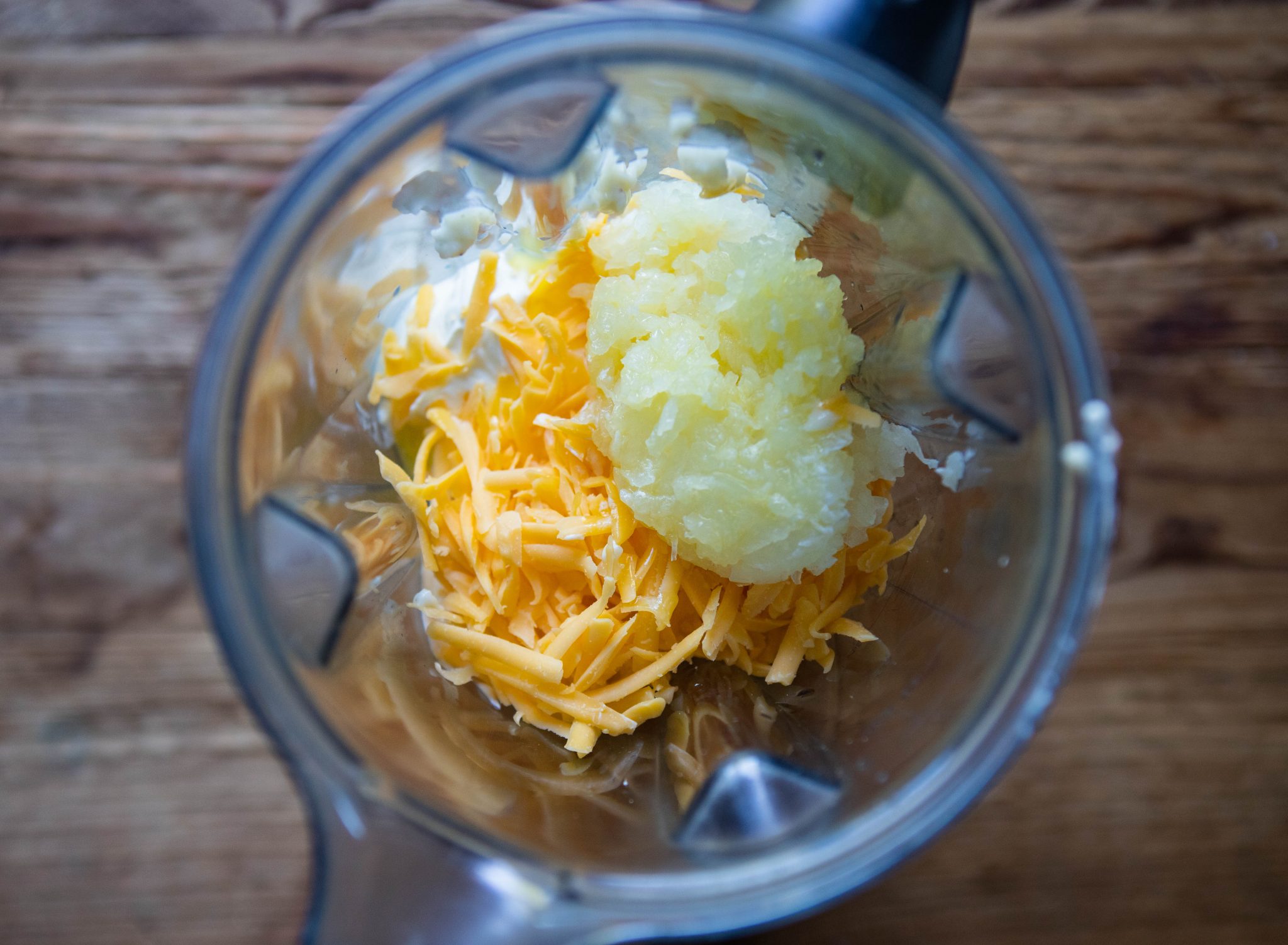 Combine the bread crumbs with the remaining melted butter, and mix with a fork till combined. Sprinkle all over cheesy potato mix, then bake at 350 for 30 minutes.

Serve immediately, or cover and store in the fridge up to 3 days in advance. Reheat in a 300 oven till warmed through, about 20-30 minutes. 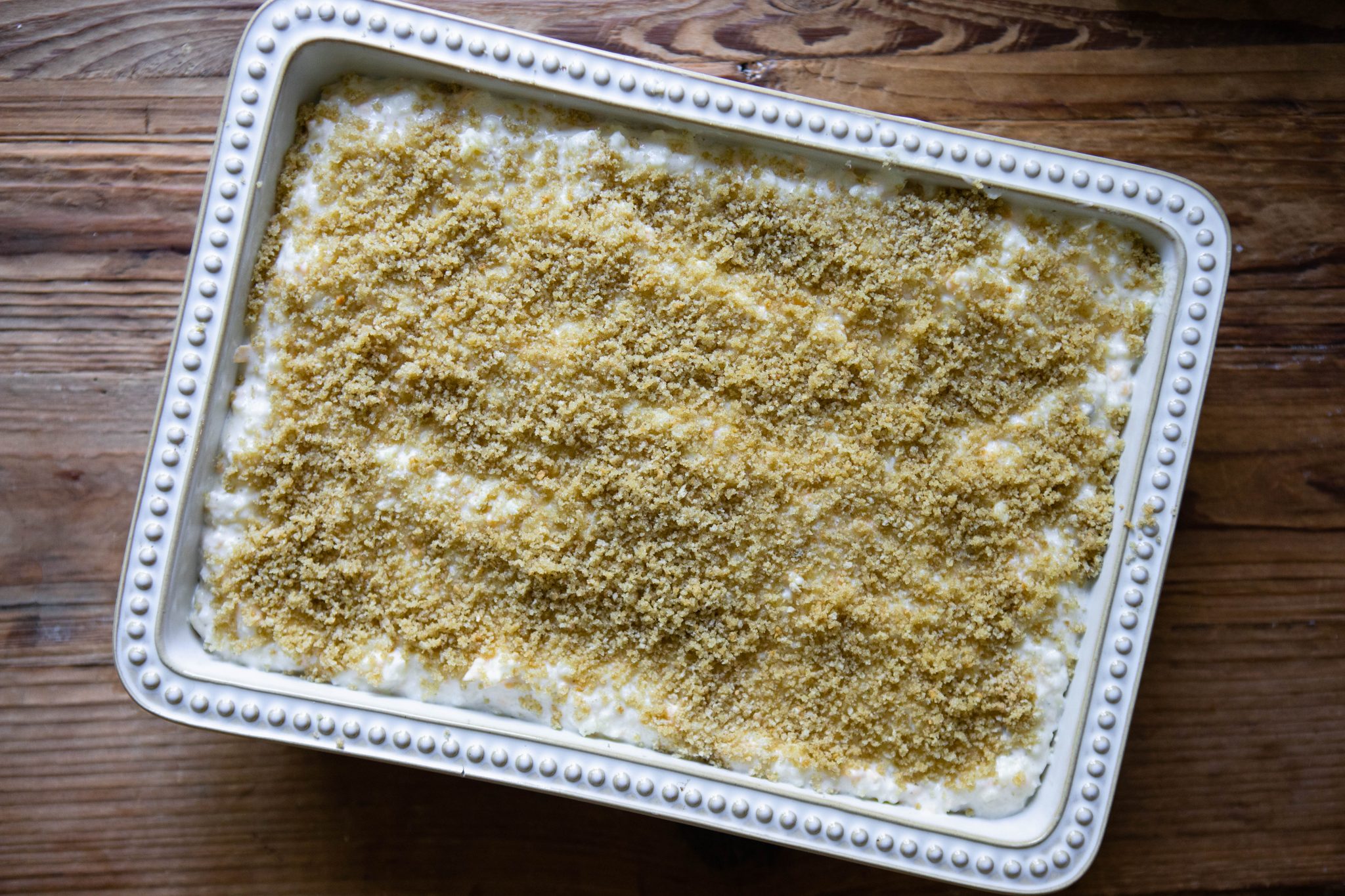 What is a potato ricer and how do you use one?

A potato ricer a kitchen gadget used to process potatoes or other food by forcing it through a sheet of small holes, which are typically about the diameter of a grain of rice. It is relatively inexpensive and is often thought to be a one trick pony in the kitchen, but it does have multiple uses.  Use it to squeeze extra water from foods like zucchini or frozen spinach. It can also be used to puree baby food! When using a ricer for potatoes, you wind up with the creamiest, totally lump-free potatoes. Riced potatoes can be used to make casseroles or good old fashioned mashed potatoes.

Using a potato ricer is really easy! Simply boil your potatoes then place one at a time in the ricer, and squeeze through. One of the best things about using a ricer is there’s no need to peel the potatoes before boiling. It easily separates the peel from the potato as you squeeze it through the sieve.

Ricing takes about 30 seconds per potato, and is actually much quicker than mashing them by hand. 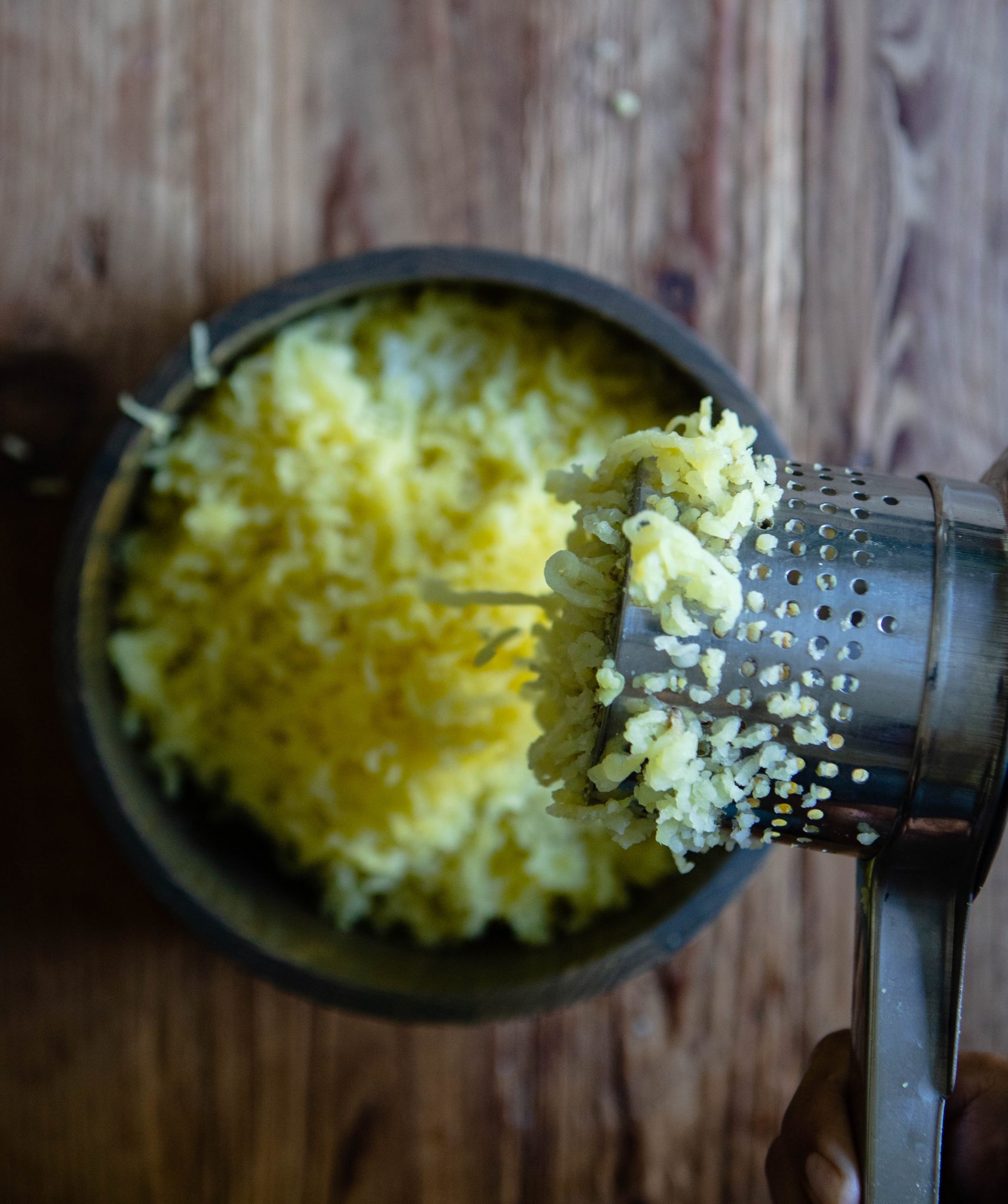 How to rice potatoes without a ricer

If you have a food mill, you can certainly use it here. Mills are a little more aggressive than ricers, so your potatoes may turn out a bit more mashed, but that’s okay. 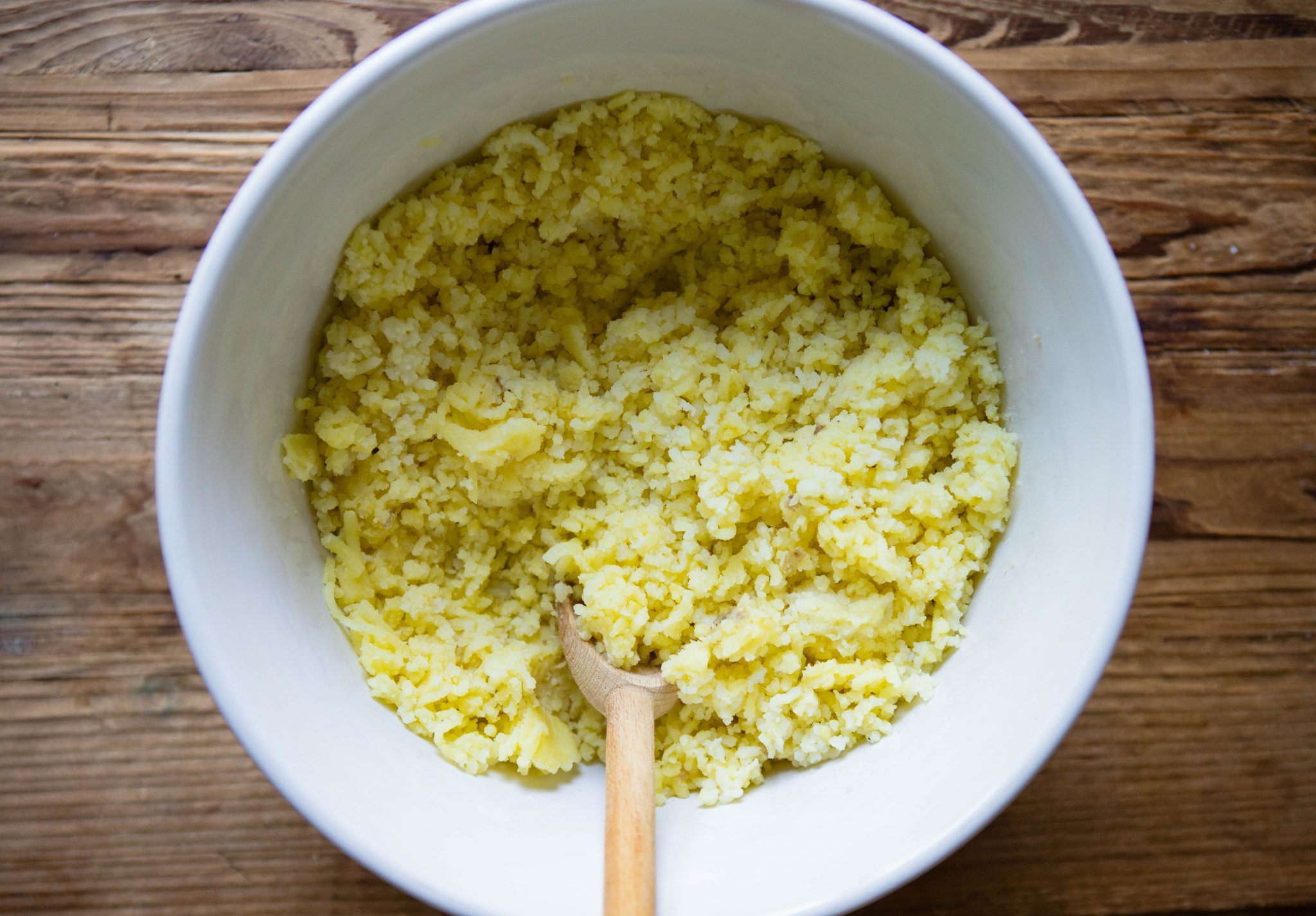 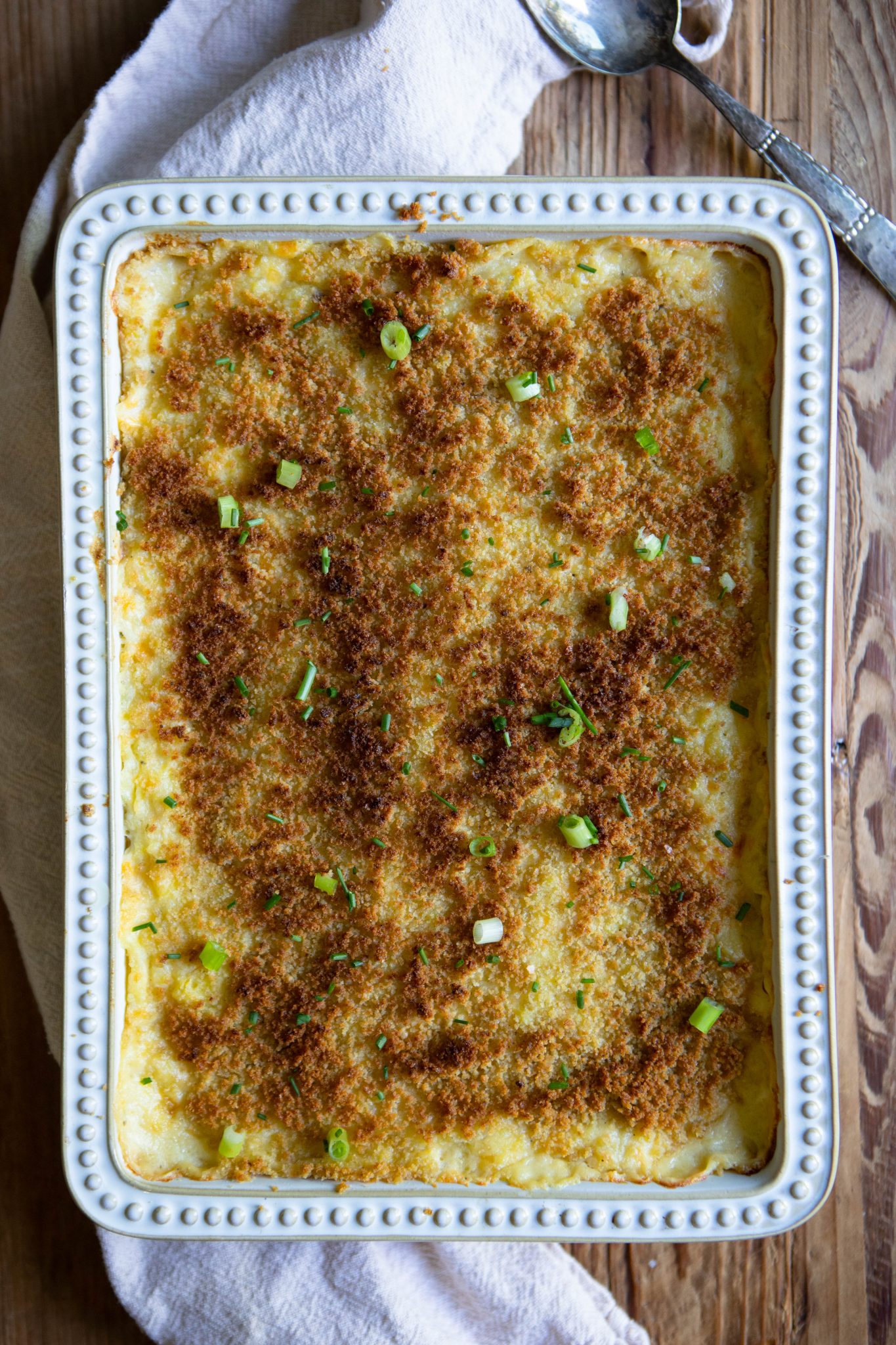 What to serve with this Cheesy Potato Casserole Recipe

I love this dish during the holidays. It just screams good potluck food to serve alongside a baked ham and green bean casserole for Christmas parties. Small ones with your bubble this year of course. 😉 Or it’s great as an alternative to mashed potatoes for Thanksgiving. For non-holidays though, it would taste great with a pot roast or baked chicken cutlets. 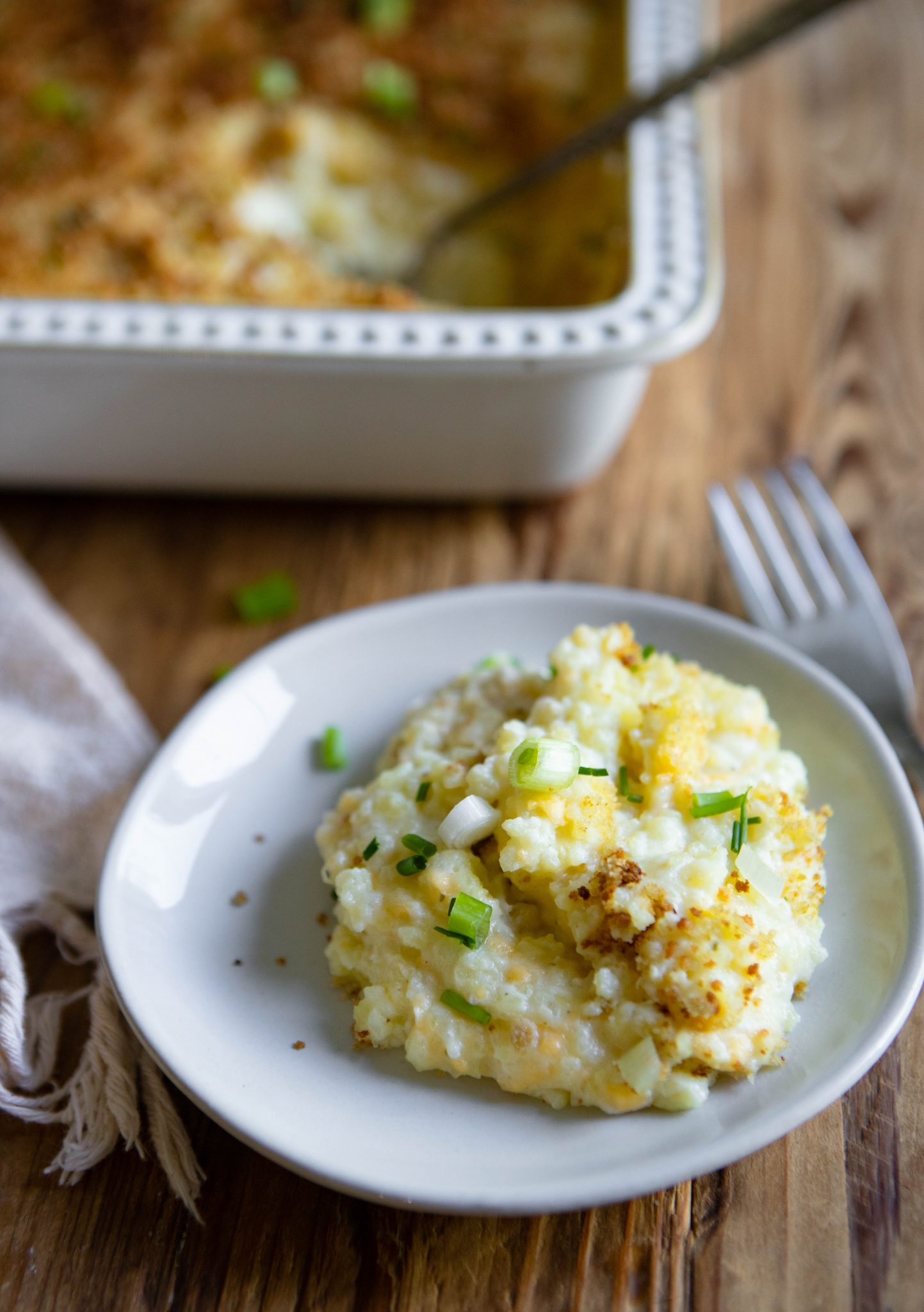 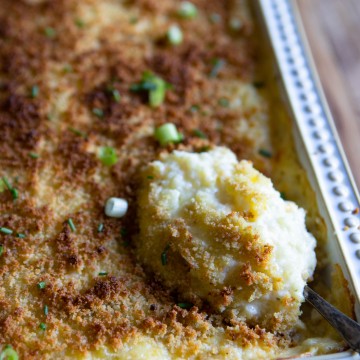 This cheesy potato casserole recipe is creamy and flavorful, without being overly rich and heavy. The perfect side dish for the holidays!
No ratings yet
Print Pin Rate
Prep Time: 30 minutes
Cook Time: 30 minutes
Total Time: 1 hour
Servings: 8 people
Author:Andrea

You can find potato ricers at most home goods stores, including Williams Sonoma, Bed Bath & Beyond, and of course Amazon. You can swap out crushed corn flakes for the bread crumb topping.