This loaded hummus dip recipe is a quick and easy appetizer to bring the wow factor to a party. With roasted eggplant, feta cheese, and roasted red peppers this hummus dip is sure to please!

Ever since I discovered the power of loaded hummus dip earlier this year, I have been the self-designated appetizer bringer for any public gatherings I have been invited to. Girlfriends night out? I’ve got the appetizer covered! Family dinner at a friend’s house? Sign me up for the appetizer! You get the picture 😉

But it’s seriously so nice to have a “recipe” as easy and tasty as this in my back pocket because it instantly relieves decision fatigue. And since I always seem to be running late, I really appreciate how quick this is to make. I’m just hoping my friends don’t grow tired of me bringing this anytime soon.

The layered hummus dip recipe I first started making this past Summer called for all fresh ingredients – cucumbers (English or Persian preferred), raw tomatoes, red onions, feta and the crispy chickpeas. Because of this, it admittedly came together a bit quicker than this version. Everything is supposed to be easier in the Summer though.

But I promise this version is still very easy, you’ll just have to plan ahead a bit more to account for roasting time. Plus, the roasted veggies feel a little more appropriate for the cooler seasons ahead.

What Do I Need For This Hummus Dip Recipe? 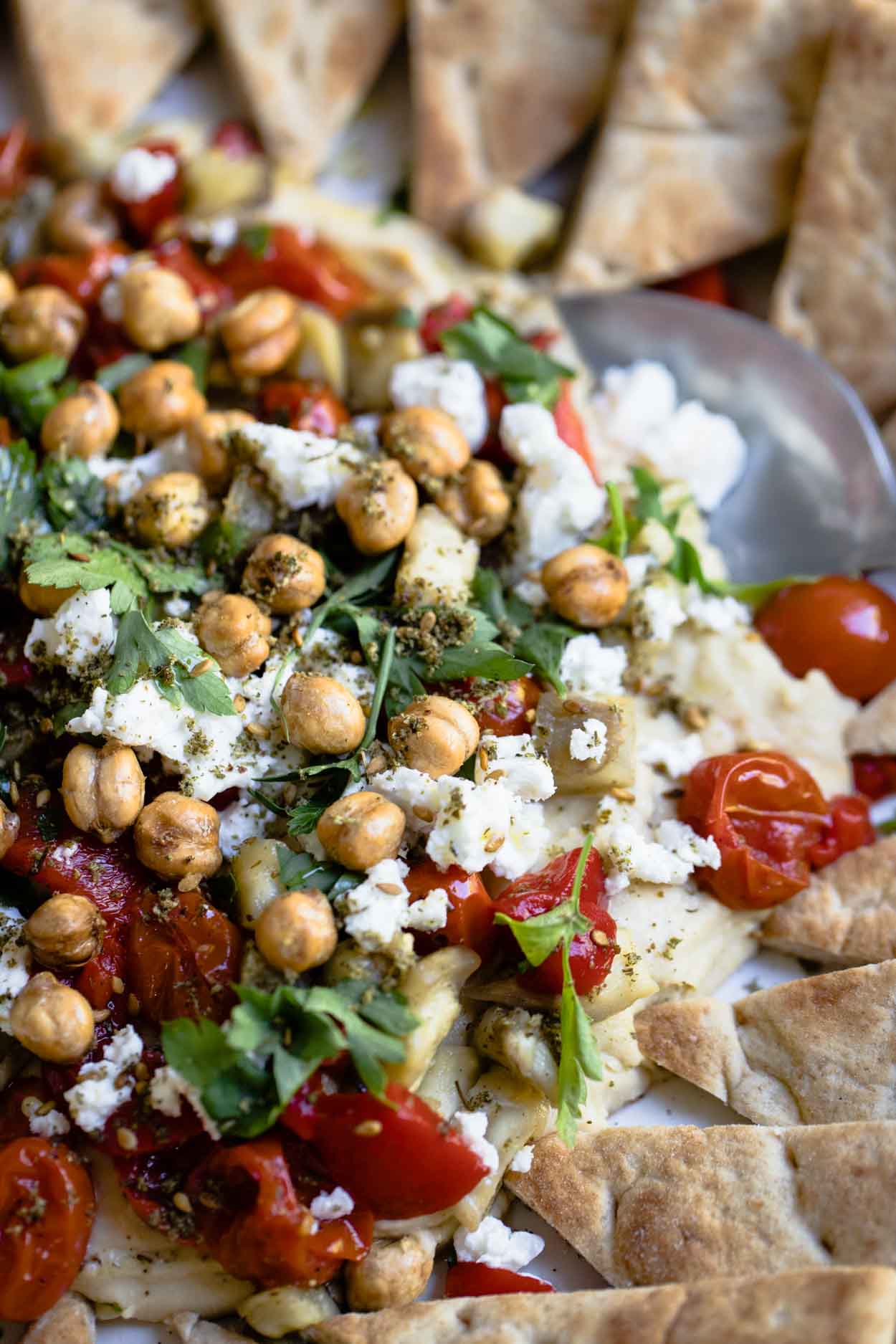 Do I Need To SAlt My Eggplant Before Roasting?

So for years I have always heard that the crucial first step in cooking eggplant is to first salt it in order to remove the bitter taste. But it turns out, the eggplants from yesteryear were a lot different tasting than the eggplants we grow now. Thus, salting the eggplants nowadays is more about removing moisture than removing bitterness. So if you don’t have time to salt your eggplants before cooking, you will still get delicious tasting eggplant, they may just be a bit more watery.

If you do want to maximize your eggplant flavor and texture though, do consider first salting them.

Simply cube the eggplant and toss in a colander or sheet pan with a generous amount of salt. Allow to sit for about 30-60 minutes, then rinse and pat dry before roasting.

As the eggplant sits there in its salt coating, you’ll see little beads of sweat pop up, letting you know the salt is doing its job. The salt will also work to flavor the eggplant a bit by soaking into the flesh.

Another easy tip I learned when roasting eggplant cubes, is to only partially peel the skin off, as to leave a few strips here and there. To quantify, I suggest peeling off about 70% of the skin, leaving 30%. This will help to hold the flesh in tact when roasting, so that you still get the mouthfeel of soft roasted eggplant, that doesn’t fall apart into mush. 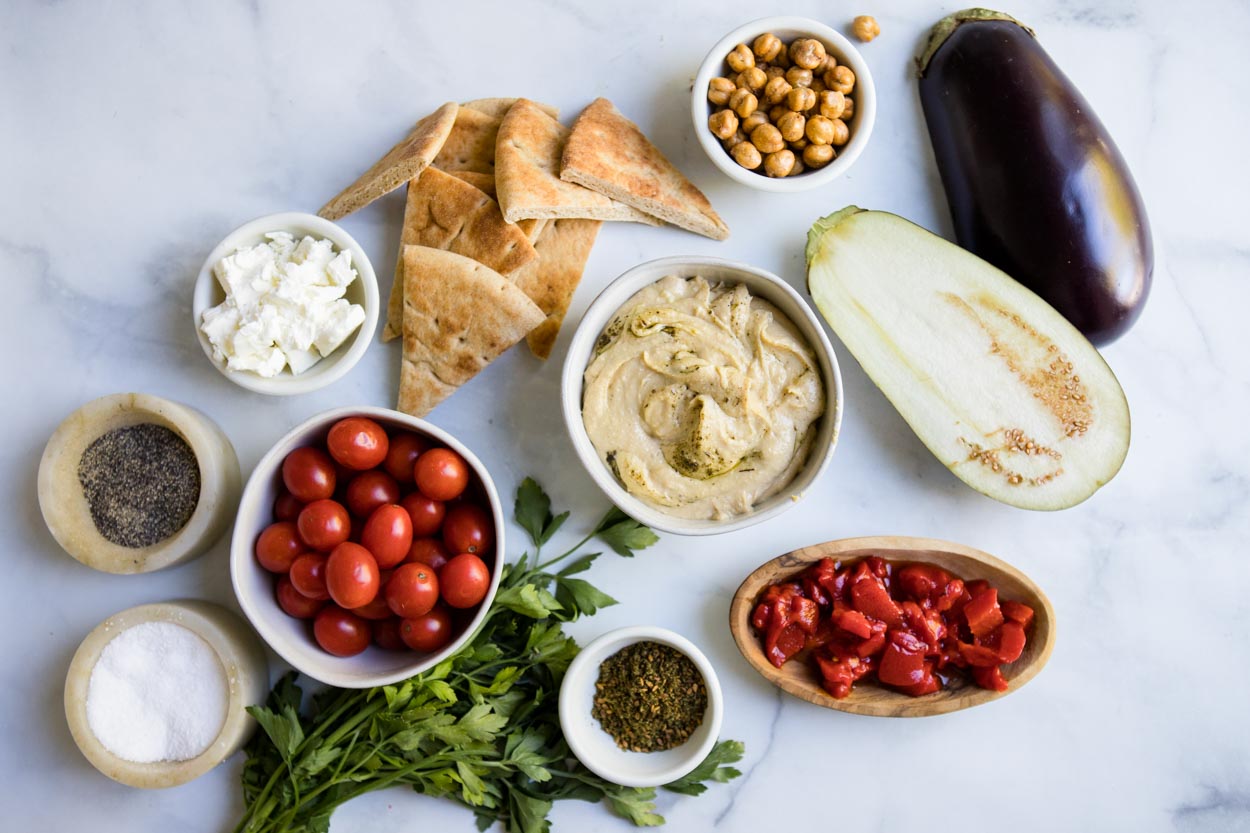 I like to start with a nice big platter so that I can arrange my pita bread around the dip, but you can certainly bring it in a bowl – no rules here! Start by spreading out your hummus into a somewhat thin layer, and then start loading it up!

I layer on the veggies first, starting with the roasted and cooled eggplant and tomatoes, then the jarred roasted peppers. Once the veggie base is laid, then goes the feta and crunchy chickpeas, and then finally, a parsley garnish and a drizzle of olive oil, with a sprinkle of za’atar. 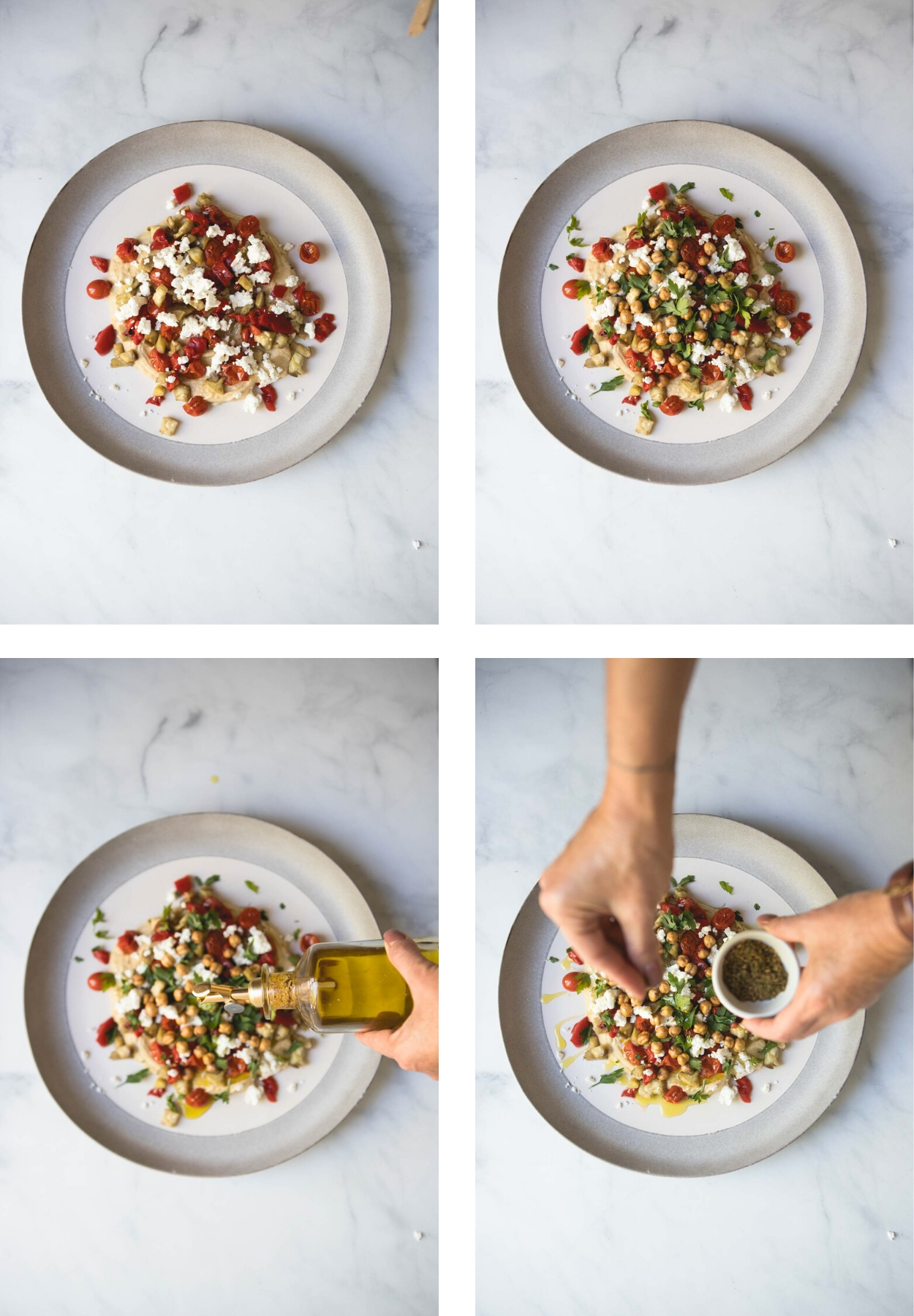 What is Za’atar and Is It Necessary for This Dish?

Za’atar is a Middle Eastern spice blend made up of thyme, cumin, coriander, sesame seeds, sumac, salt and aleppo chili flakes. It can be found at many grocery stores, online, or of course at Middle Eastern markets. It’s often used as a rub for chicken, beef and lamb, or like it’s used here, as a finishing seasoning to sprinkle over hummus, Labneh or baba gonoush.

The beauty of Za’atar is it has a warm, savory flavor with a bit of tang, thanks to the sumac, a plant commonly grown in East Asia and Africa.

Unless you often make Middle Easter dishes at home, you may find your pantry shelf missing this key ingredient to make your own Za’atar seasoning at home. If this is the case, I suggest finishing the hummus with a sprinkle of paprika. If you also want that tangy flavor, top it off with some grated lemon zest – a good substitute for the sumac – and a flaky sea salt. 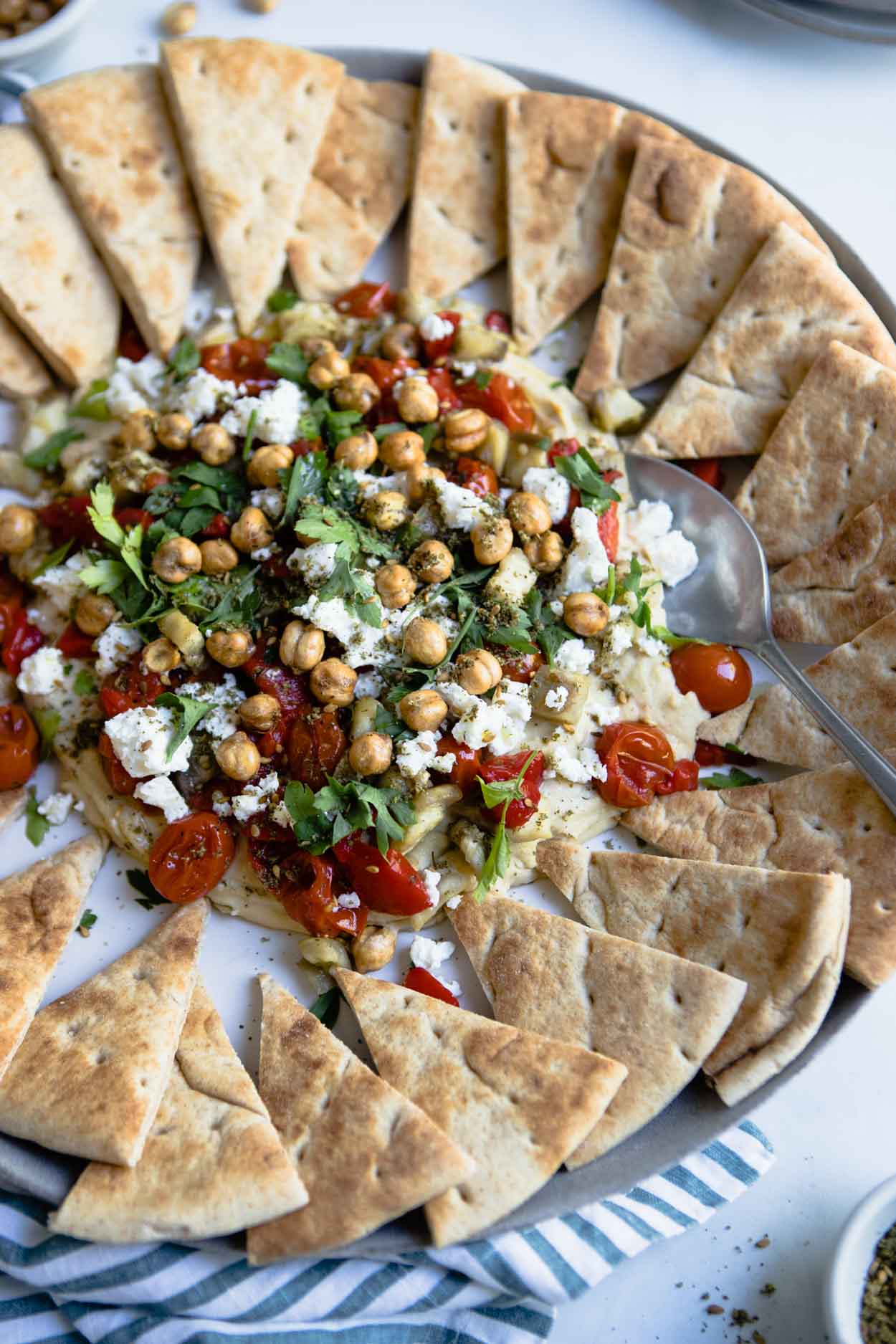 Can I Make This Loaded Hummus Dip Ahead Of Time?

This dip is best when assembled and served immediately. However, you could roast your eggplant ahead of time, roast your chickpeas, and chop the veggies. Just have it all ready to be assembled!

How Long Is This Hummus Dip Good For?

Assuming you have any leftovers (and I’ll make a bet you don’t!) leftovers can be kept covered in the refrigerator for up to 2 days.

Can I Cut This Recipe In Half?

Absolutely. If you are serving a big crowd, I suggest using 2 tubs of hummus, versus 1 if you are just preparing for 3-4 guests. 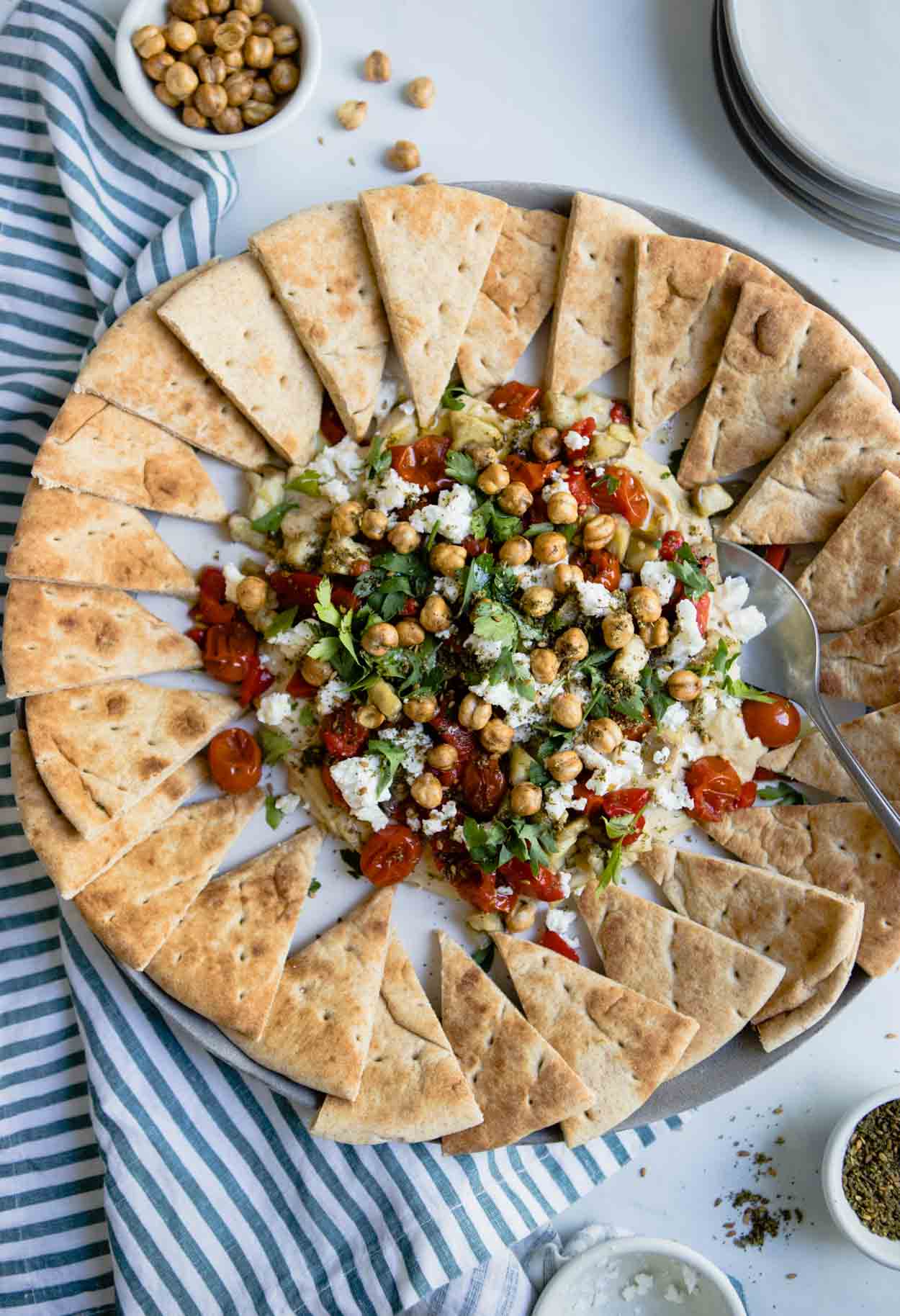 I look forward to hearing how you all enjoy this appetizer recipe! Please share your spreads and your guests reactions 🙂 And if you need another idea for store bought hummus, try my Hummus Crusted Chicken and Vegetable tray bake. It’s just as easy to throw together and is made in all one pan, making clean-up a breeze. Or try this fresh veggie version of this dish, with my Layered Hummus Recipe, which uses cucumbers and cherry tomatoes. 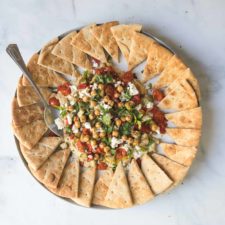 The quantities for toppings are a suggestion, so start adding your toppings gradually, and add more or less as suggested, according to your tastes. Accordingly, if you are serving a big crowd, I suggest using 2 tubs of hummus, versus 1 if you are just preparing for 3-4 guests. If you don't have Za'atar I suggest finishing the hummus with a sprinkle of paprika. If you also want that tangy flavor, top it off with some grated lemon zest - a good substitute for the sumac found in Za'atar - and a flaky sea salt.
Tried this Recipe? Tag me Today!Mention @Howe.We.Live or tag #HoweWeLiveRecipes!
« Cucumber Jalapeno Margarita
Layered Hummus Dip »