Home » Resources » Kitchen Hacks & Tips » Food Processor vs Blender, Which One Is Better? 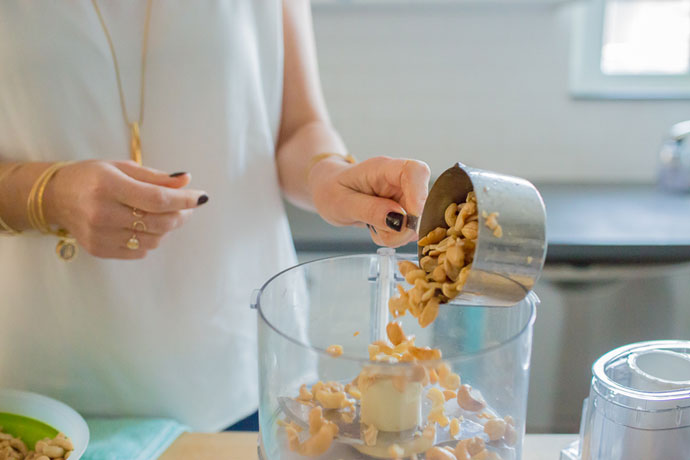 The question has been raised  many times on Instagram, as to whether a Vitamix, or some other type of powerful blender like a Blendtec, can truly replace several other gadgets in your kitchen, including a juicer and Cuisinart food processor

. With some fussing and straining, you can sorta get the same juice experience with a blender as you can with an actual juicer, but after many attempts, my verdict is that a blender can in no way replace the awesomeness of a food processor. Here’s my verdict on the food processor vs blender conundrum.

I didn’t start religiously using a food processor until very recently, and after my first experience using one I quickly begged the question, “How did I live without one for so long?!” I have a pretty basic Cuisinart and it has proven itself so useful that it secured itself a permanent place on the kitchen counter.

Here are just a few ways I use my Cuisinart food processor on a weekly basis:

The slicing blade makes quick work of slicing veggies into thin slices, not paper thin like a mandolin, but much thinner and more consistent than you’d be able to slicing on your own. 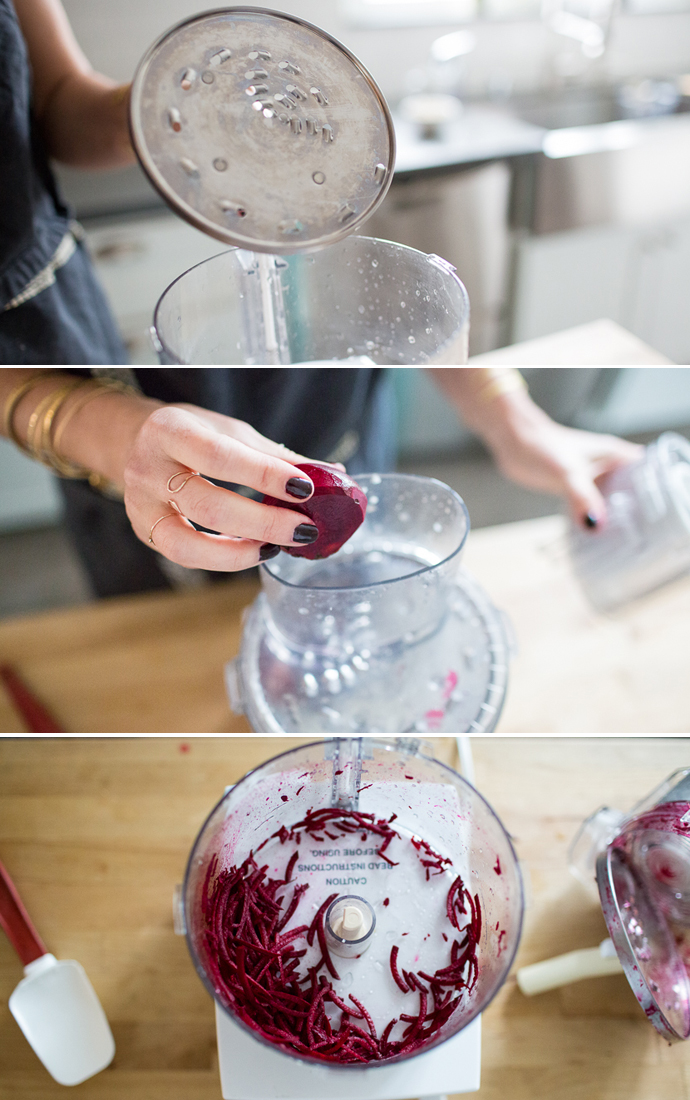 The shredding disc allows you to shred just about any fruit or veggie, and even cheese. I love raw beet shreds for salad toppings by the way.

And of course the standard chopping blade is what will quickly chop up any number of foods and make quick purees as well.

So you see, I use my food processor a lot. And I’ve gotten so accustomed to using it that I make quick work of the set up and clean up, and usually just throw all the parts in the dishwasher on the top rack for easy clean up. In fact a couple of weeks back when my mom was over to help prep our St. Patrick’s Day dinner, I encouraged her to use the food processor to shred the cabbage, instead of shredding it by hand with the damn cheese grater. She was stubborn and refused, saying it would lead to more clean up. Well, 25 minutes later when she was still shredding cabbage by hand, I pointed out to her that she could have had the cabbage shredded and the processor cleaned up by now. She shot me daggers.

How does this all relate to a blender you ask? Well, one of the main selling points that the charismatic Vitamix dude at Costco sold me on, was that this powerful blender could do the work of several other kitchen appliances, including a food processor. Having never used a food processor before, I naively believed him, and $500 poorer, took my Vitamix home. It wasn’t until I visited a friend and actually got to see a food processor in action, that I realized I had been sold a bill of goods. 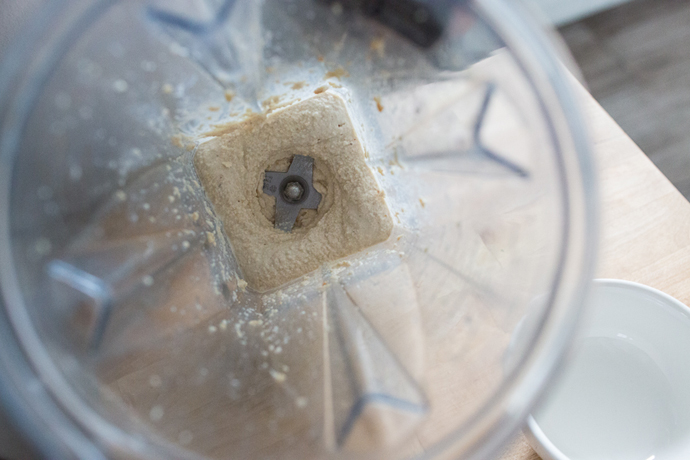 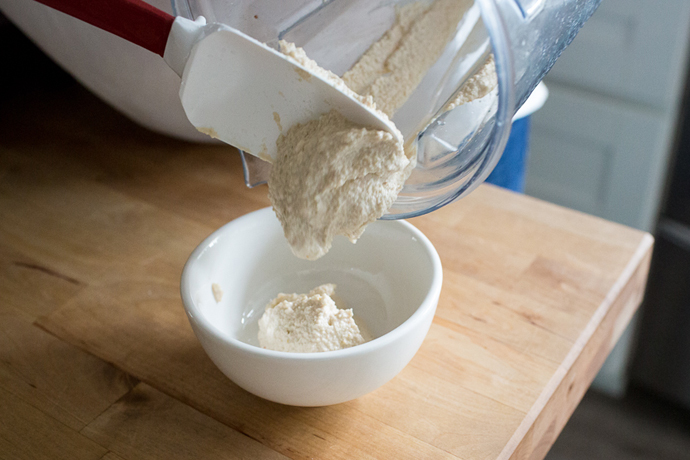 The Vitamix can indeed chop and puree things very well, but it cannot slice or shred. And unless what you’re pureeing is of a somewhat liquid consistency, it does a very inefficient job. You see, a good portion of what you puree, from dips to gooey power balls, gets trapped in the bottom of the Vitamix and is extremely hard to get out from between the blades, especially since the bottom is not removable.  You will find yourself wasting many precious minutes in the kitchen trying to scrape out every last bit while avoiding the sharp blades. 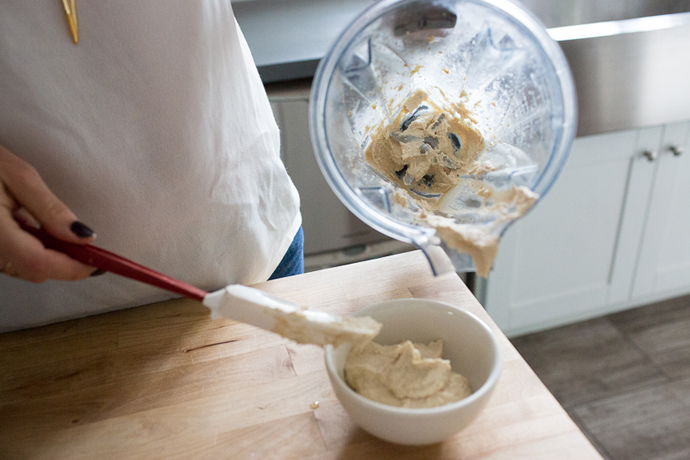 As you can see, you have to wedge your hand in the bottom there and try to scoop out as much as possible from between the blades, but a good amount inevitably gets left behind. This isn’t only annoying and a waste of time, but costly, especially when you’re using high priced ingredients like organic raw cashews. With a food processor, you can easily scrape the bowl clean and get out every precious last crumb.

I love my Vitamix and don’t have a single regret with my purchase. I just wish I would have known that it wasn’t as “all-purpose” as it’s often made out to be. I also wish some cookbooks, including It’s All Good, would stop implying that a “high power blender” can do the job of a food processor just as well. I continually read recipes instruct cooks to make everything from nut butters to dense dips in a blender, when they should really be made in a food processor. For smoothies, pureed soups and even frozen desserts, it does an incredible job, but its longevity stops there. Trying to use it for sticky, gooey, dense jobs in the kitchen will waste your time and leave you frustrated.

Bottom line, if you’re an avid cook, you probably already have a food processor and know the full extent of its usefulness in the kitchen. But if you’re like me and are still fine tuning your home cooking skills and looking to expand your kitchen tools, you may be wondering what you should buy first, or if you can skip the food processor and just buy the fancy blender.

My answer is, you’ll eventually want both, and what comes first is up to you.

If you have a growing family and they all enjoy smoothies on an almost daily basis, by all means go with the Vitamix. You can sneak in an unusually high amount of healthy veggies in a smoothie made in a Vitamix because it blends everything up so well.

If you don’t think you’ll make smoothies more than once or twice a week, but cook almost every day, then go with the food processor.

I hope this helps, and clears up any questions about which appliance is more useful. In our house, they’re both very useful, but they each have their own separate, unique purpose.